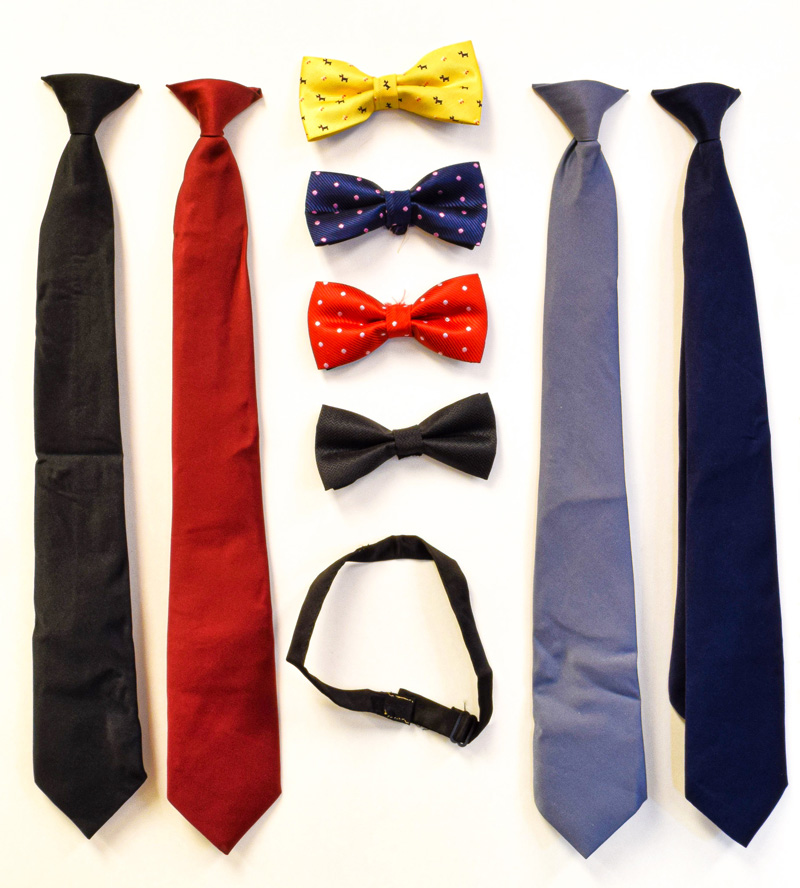 Our assortment of magnetic ties!

In the past, we've looked at how magnets can be used to hold Pins and Brooches in place. Using magnets can make it very quick and easy to put a pin or brooch on any piece of clothing, without poking holes through it. We'll apply the same idea and magnetize some other accessories, like ties, bow ties, cuff links and buttons!

When tying a tie or bow tie, how many times does it take to get it right, while secretly wishing you could just use a clip-on tie? Use some magnets to make that clip-on tie a conversation starter!

We want magnets that are thin, so that no one knows we're wearing a pre-made tie, but also need them to be strong enough to attract through two layers of dress shirt material and stay put during even the craziest dance moves. We glued a R842 magnet on the back of the tie, attracting to one under the collar. We chose the R842 ring so that we didn't have to remove the clip. If your tie doesn't already have a clip, two D8H1 disc magnets could work well.

Another option would be to sew our SW-S, SWP-S, SW-M, or SWP-M to the back of the tie and under the collar. The only downside of using magnets for this is that you can't tie the tie around your head...

We used similar magnets for a "snap-on" bow tie. We were able to place one half of the SW-S sewing pair in the knot of the bow tie, behind one layer of fabric, attracting to the other magnet behind the collar. This gave a firm hold, but was still easy to remove.

We also used the strap that came with the bow tie to make quickly interchangeable bow ties. The "positive" half of the SW-S was sewn into the middle of the strap (where the opening in the collar would be). We then sewed the "negative" half into a few bow ties, making it super quick to swap them around!

What about using magnets on the strap of the bow tie, rather than using a clasp or snap? We sewed the same SW-S into each end of the strap, paying close attention to the polarity of each magnet. If you wanted to make the strap adjustable, you could sew additional magnets into one end.

We've heard from quite a few of our customers who have replaced shirt buttons with magnets - this is a great modification and is often used to help those with disabilities. Which magnets work well?

We sewed our SWP-S magnets into a dress shirt with great results. The plastic casing makes it easy to sew and also offers protection from moisture. They provide a strong hold, but aren't too hard to pull apart. We were able to keep the buttons in place, to give the appearance that it is a normal shirt, but it's a really attractive shirt!

It's important to remember that high temperatures can demagnetize neodymium magnets. If putting magnets in a dryer, use the lowest temperature setting, or air dry.