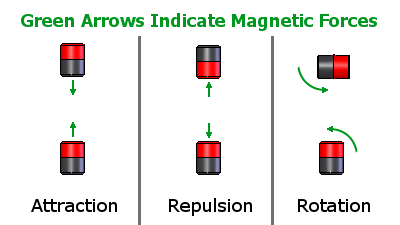 Did you know that two magnets don't just attract or repel each other?  Depending on how they are positioned, they can also impart a twisting moment on each other.  This month's article on Magnetic Forces describes these forces, why magnets behave like this, and when to expect this twisting moment.

Magnets attract towards each other

When you place opposite poles near one another, they will attract towards one another.  For this discussion consider our D68PC-RB plastic coated magnets, which use two colors to indicate the poles.  The red is the north pole, the black is the south pole.

Put the red end of one magnet near the black end of another to feel the attraction force.

Magnets repel one another

When you place like poles near one another, the two magnets will repel one another.  You can do this with red-to-red or black-to-black.

Magnets twist if the magnetic fields are not aligned 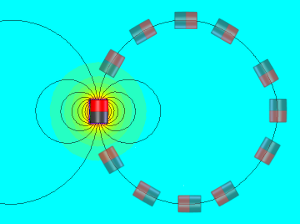 Magnets not only exert a force on one another, they also can exert a twisting moment as well.  If you have a single magnet in free space, the magnetic field looks something like the image at left.

If you place a second magnet somewhere near the first, you can feel a twisting torque on it that tries to align the magnetic fields to one another.  The faded images of other magnets shows how a second magnet “wants” to be oriented.

If the magnet is not aligned this way, it will feel a torque or twisting moment that tries to rotate it.

Magnets can attract or repel if side by side

Generally, the force you see in these side-by-side cases is lower than the pole-to-pole forces.

We are often asked: What is the lateral pull force of a magnet?  Our Magnet Calculator estimates the force from a magnet to a steel plate or to another magnet (Pull Force), but that’s the force towards the steel plate or magnet.  This is often called the normal force, because it acts normal (perpendicular) to the surface of the magnet.  What about the sideways or lateral force?

With a magnet attracting towards a steel plate, there is no lateral force.  That’s right, the magnetic force only pulls straight towards the plate, normal to the surface. 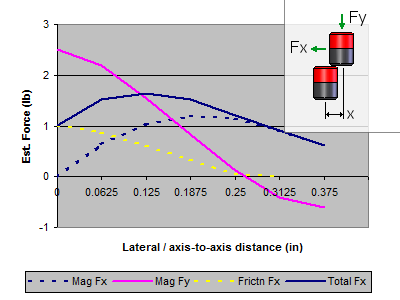 Magnetic Forces both normal and lateral to the pole surface

If you have a magnet stuck to a vertical steel surface, like a refrigerator door, there is no magnetic force opposing the downward pull of gravity.  What keeps the magnet from sliding down?  Friction.  The strong pull towards the steel surface helps increase friction, which resists the downward pull.  Learn more in our earlier article on How Much Will a Magnet Hold?

With magnet-to-magnet attraction, you can feel friction forces when trying to slide two magnets apart.  That’s why our rubber coated magnets are so hard to slide apart – increased friction!

While exact answers depend on a lot of factors, we usually figure the force required to shear a magnet sideways off another magnet will be less than the listed Pull Force, Case 1, perhaps about half of that value.

Some magnet shapes can be used as a magnetic compass if placed on a flat, smooth, non-magnetic surface.  Because the D68PC-RB cylinder and D84PC-RB disc magnets have sides that are slightly angled, they work well for compass demonstrations.  The red end points towards the Earth’s magnetic north pole.

Learn more in our article about Which Pole is North?