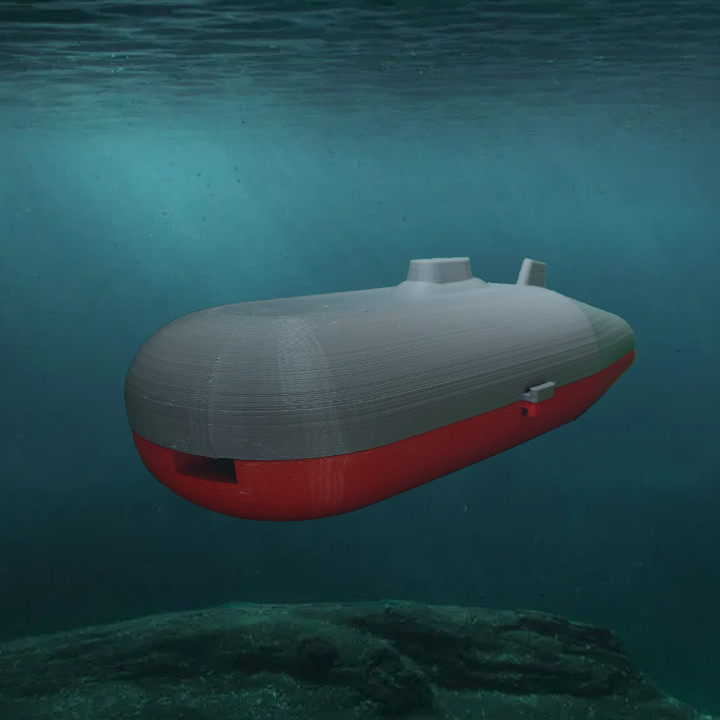 In Tom Clancy’s debut novel, The Hunt for Red October, a renegade Soviet submarine has a new silent drive propulsion system.  In the book, this was described as a series of ducted fans, like the ducted propellers on a modern jet-ski.  In the movie that followed, the silent drive was changed to a magnetohydrodynamic drive.

A caterpillar drive. Magneto hydrodynamic propulsion. It's like a jet engine for the water. Goes in the front, gets squirted out the back. Only it has no moving parts so it's very, very quiet.

That sounds like typical Hollywood technobabble, but it’s actually based in reality.  Mostly.

This month, we’ll take a look at the physics of a magnetohydrodynamic drive as an excuse to build a submarine with magnets. 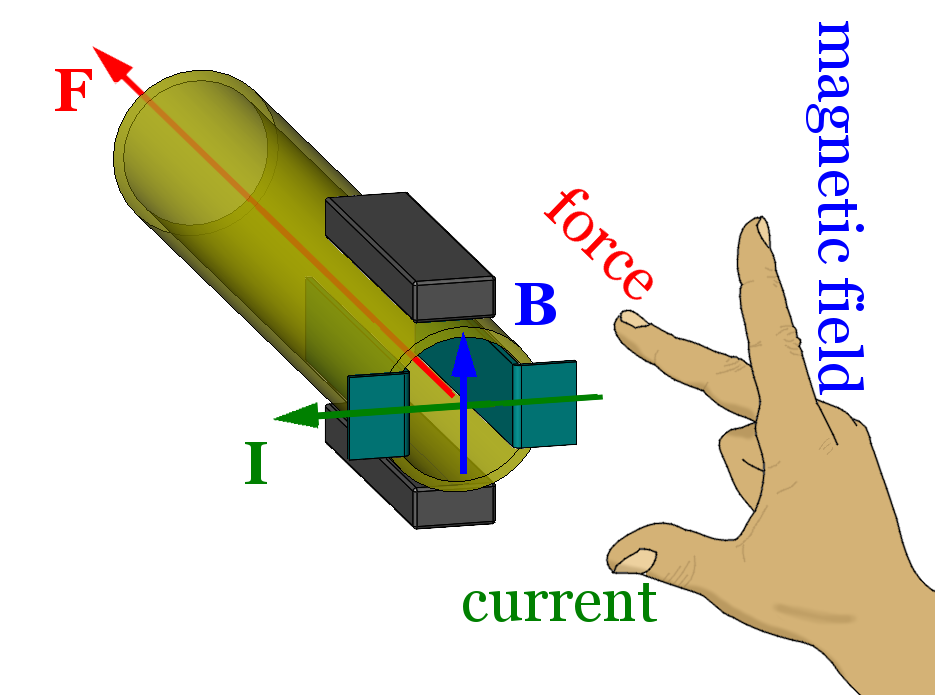 The right hand rule of the Lorentz force depicts the expected thrust direction.

Salty water conducts electricity.  Imagine a drive tube with two conductive plates secured on opposite sides of the tube.  With one grounded and the other connected to a voltage, a current flows through the water across the gap.

The resistance of the water changes depending on how much salt is dissolved in it.  The more salt, the more current you’ll get.  Since submarines operate in the ocean, we’ll assume the operating fluid is seawater, roughly 3.5% salt by weight.

Finally, let’s consider the Lorentz force.  Consider what's happening to a tiny little bit of conductive water within that tube. The right hand rule says that, with a current flowing in one direction, and a magnetic field runs in a direction perpendicular to that electric flow, then the bit of water will feel a force that’s perpendicular to both of those directions.

Whew, that’s a mouthful.  Let’s express that graphically with the right-hand rule.  If the current runs in the direction of the thumb, and the magnetic field with the index finger, the force is down the middle finger.

A drop of blue food coloring helps show water flowing through the tube!

OK, the proof is in the pudding.  Does this really work?  We hot-glued some bent pieces of aluminum inside a tube, and taped some BY084 magnets in place.  We placed the whole assembly in some salty water, and applied 12V to the pieces of aluminum.  Sure enough, water was made to flow through the tube.  It works! 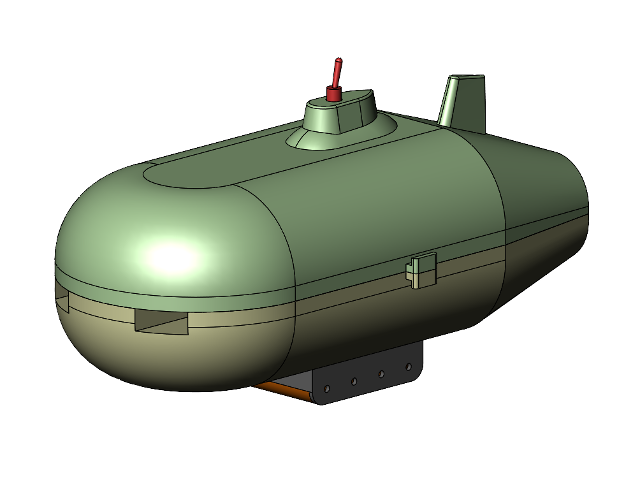 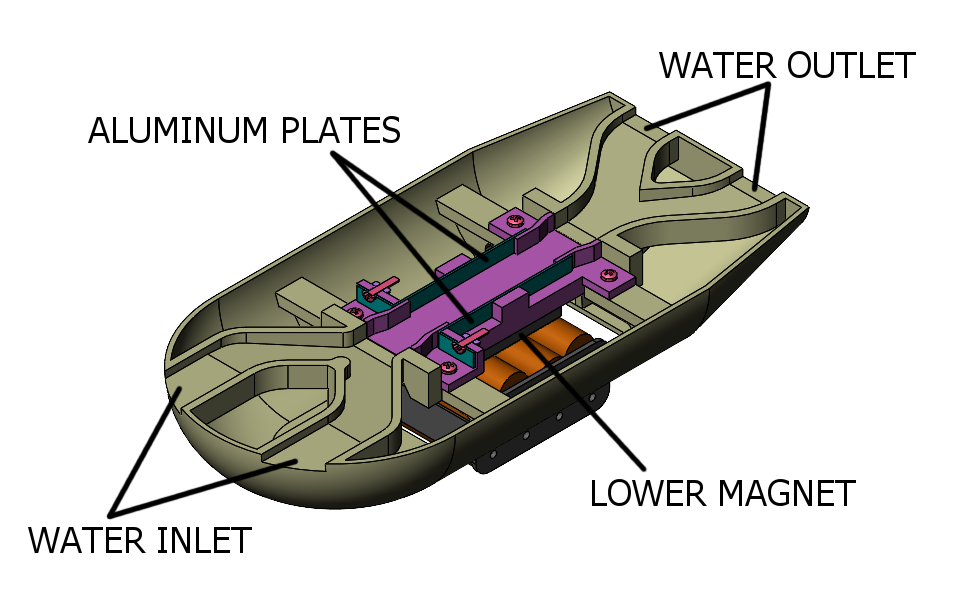 A section view that cuts the top half off reveals the ductwork, forming a pathway for water to flow from fore to aft. 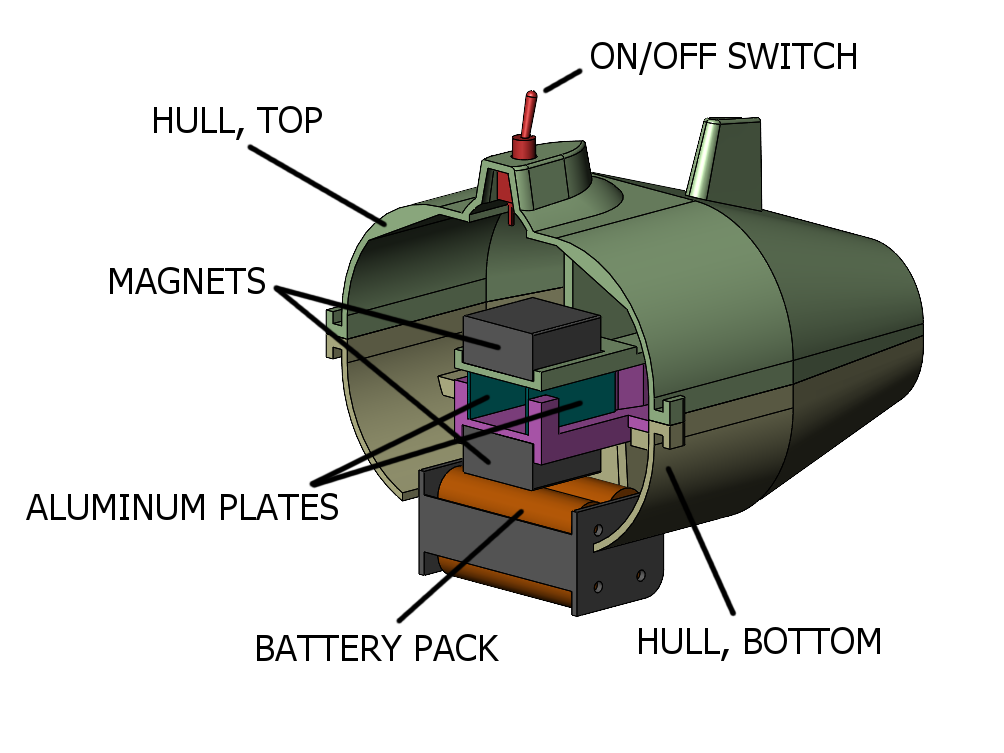 A section cut through the center of the drive section reveals both a pair of attracting magnets and the electrically conductive plates on either side of the duct.

For a proper demonstration, we’re going to need something that looks a bit more like a submarine.  Warm up the 3D printer…

We designed a bracket that holds two pieces of aluminum on either side of a rectangular passageway.  The model also has provisions for positioning two large block magnets above and below the passageway.

We used a two part assembly, where the top snaps onto the bottom.  Since the top magnet is in the top half of the hull, this worked nicely to allow the strong attractive force between these powerful magnets to pull the halves together.  It didn't require any other method of securing them.

The original test with the clear tube used two 2” x 1/2” x 1/4” thick, BY084 block magnets, which were adequate for the test to get some flow.  Naturally, an “adequate” magnet doesn’t seem quite big enough for a project inspired by the world’s largest submarine.  Plus, the math of that Lorentz force says that the thrust we get out of this system is directly related to the field strength.  If we double the field strength, we get double the force!

The drive bracket is bolted into a 3D printed submarine shape that snaps together in two halves.  Add an on/off switch and a battery pack, and we should have a self-propelled, magnetohydrodynamic submarine!  The battery pack used 8 AA batteries in series, mimicking the 12 volts used in our initial tests.

It works! With 12 volts applied, water flows through the ductwork.

First, we tested the drive section in a small container of saltwater.  The flow looked stronger than we had hoped for!

The upper BY0X08 magnet is placed on top of a few plastic spacers in this test, since the structure of the top half of the submarine is missing.

Finally, we assembled the submarine and launched it in a much larger demonstration tank.  Sail along with us and enjoy the results!

In the video, we tested the submarine in water with different salinity levels.  It worked OK with salt levels around normal seawater, about 3.5 grams of salt for every 100 grams of water.  It was a bit slow, so in the end we dumped a lot more salt in the water for a better demonstration.  Water like the Dead Sea has nearly 10 times the amount of salt in it; not so good for life, but your submarine goes faster!

If you want to build this yourself, we’ll share the STL model files here: SubLower.zip, SubUpper.zip, DriveBracket.zip, Aluminum-Plate-Drawing.  We used this battery pack that held 8 AA batteries.  We used this switch for on/off control.  Some #4 screws and nuts, a bit of wire, and two BY0X08 magnets round out the parts list.

Disclaimer: There are much better remote control boats out there.

The main goal of this adventure was to demonstrate the Lorentz force, and have a bit of fun along the way.  We like to think we were successful.  We made a boat propelled by magnets and electricity!!!

We quickly learned the many ways that, though magnetohydrodynamics can propel a boat, it’s not really feasible as a drive system.  Some of the many drawbacks include: 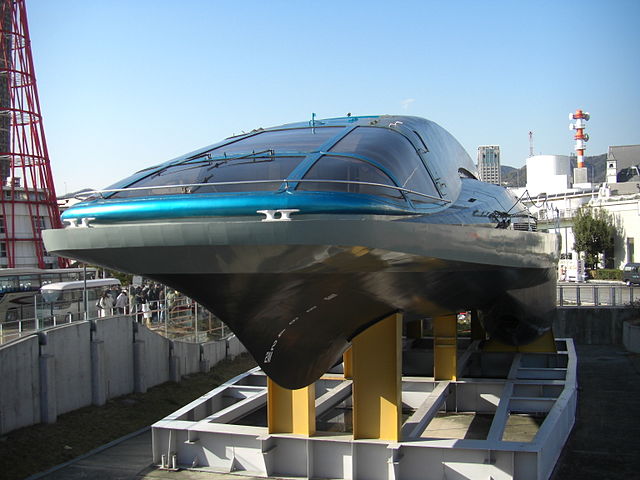 The Yamato-1, a real ship driven by MHD.