Access panels are uniquely suited for magnets. These panels stay in one spot 99% of the time, but get moved or removed when you need to access what's underneath. Screws and adhesives are too permanent, where magnets can provide a firm hold but are not too much of a pain to remove when needed.

Let's dive into this topic and figure out what magnets are best for this.

Not too strong, not too weak, but "just right" 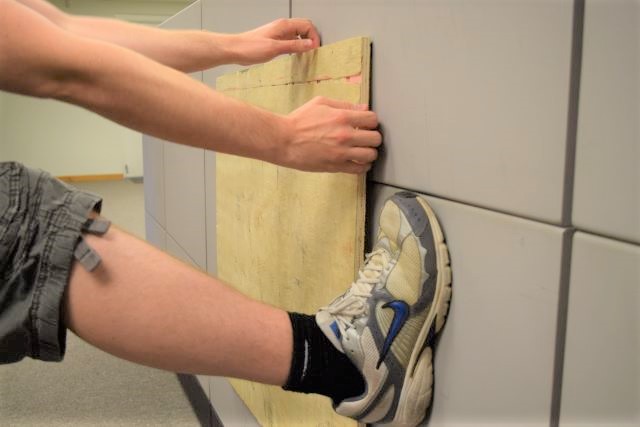 These magnets are too strong for our weak engineers to remove.

We're frequently asked what magnets are strong enough to accomplish some task, but weak enough that you can still remove them when needed. This is a hard question to answer. Permanent magnets are not smart:  they can't be turned off when you want to remove them, and they can't tell the difference between force from a person trying to remove them and undesired forces like gravity, vibrations, weather, etc. Furthermore, the "just right" strength depends a lot on the user. What feels right to a fit young adult might be very different than what feels right to a small child. If there is such a "just right" strength, experimenting is the only way to figure it out.

Access panels are the textbook example of this. What is strong enough to hold the panel in place, but weak enough to allow me to remove it?

We'll use magnets to stick this piece of plywood to the cardboard.

We found a couple pieces of square plywood laying around for a test. They all weighed around 4 oz. For an access panel, we want the weakest magnet that will still hold it in place. We tried three different magnets, D11-N52, D21, and D31, gluing four of each (one per corner) on each piece of plywood. In previous articles we've written about how to figure out what strength is needed to hold a panel to a vertical surface. Leverage & Friction and How much will a magnet hold? both have some good tips.

The plywood will cover a hole we cut in a cardboard box, and stick to two pieces of sheet metal we glued to each side. We opted for magnet-to-steel attraction here because we thought it'd be easier to place. Lining up the magnets on the panel with the magnets on the wall can be a real pain.

For an access panel being held vertically, like to a wall, the D21 and D31 both felt good. The D21 was on the weaker side - it slid off if we bumped the box too much. The D31 held the panel more securely, but was more difficult to pull off. The D11-N52 wasn't strong enough to hold it up at all. We actually tried gluing two extra magnets to the panel and it still slid off.

We also flipped our box to see what magnets could hold the panel horizontally, like to a ceiling. In that case, the D11-N52 just barely held it on, but fell off at even the slightest disturbance. 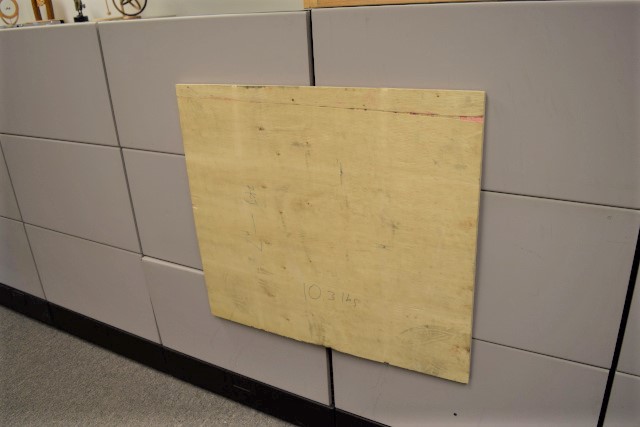 What about a larger, heavier panel? This is where it gets a little trickier. Heavier panels will necessarily require stronger magnets to hold them securely. But stronger magnets will end up being a pain to separate. What's the good balance? To test, we used a couple of wooden crate lids all weighing around 11 lbs.

First we tried four of our smallest rubber mounting magnet, RMB-B-X0. We screwed one on each corner of the crate lid, and were able to securely stick it to the painted steel wall of a cubicle. A single RMB-B-X0 has a Pull Force Case 1 of about 13 lbs, so theoretically, it would take about 13 x 4 = 52 lbs of force to pull off the wall. That's a lot of force for something that's supposed to be removable... but in practice we didn't feel that. We were able to remove the panel relatively easily by applying force to the corners and "popping" each magnet off one by one.

We were happy with this result, but for the sake of completeness we tried a couple other magnets. Four RC22CS-S, each with a pull force of 8.68 lbs, were not strong enough to hold this panel up. Even when we added some of our grippy BP6 bumper pads to the magnet, the panel still slid off.

We then tried four RX033CS-S, each with a pull force of about 20.5 lbs. These were also not able to keep the board up, despite being stronger than the RMB-B-X0. As with the RC22CS-S, the panel kept sliding down. However, once we added bumper pads on each magnet, the panel stayed in place. Even though those 1/32" thick pads lessened the overall pull force of the magnet (remember magnetic attraction weakens if anything is put between the magnet and whatever it's attracting to), the added friction kept the panel in place. That lessened force is also going to help make the magnets easier for a person to remove.

A few other miscellaneous things worth noting:

Even heavier panels and other techniques 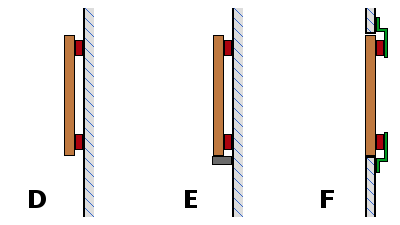 Try something like E or F for heavier panels that you still want to be able to remove.

What if your panel weighs 50 lbs? 100 lbs? More? For a heavier panel, you might need magnets with several hundred pounds of pull force to hold it up securely. We do carry magnets that strong, but we wouldn't recommend using them for this. In addition to being difficult to handle safely, they're also very difficult to remove once you stick them to something. Imagine having to play tug of war with a magnet every time you need to get access to what's underneath the panel. Not fun.

That doesn't necessarily mean you can't use magnets at all, though. We're big fans of combining magnets with other types of mechanical features, like lips or latches. For a vertical panel, you could inset the panel into the wall, or make a permanent ledge for the panel to rest on. Instead of holding the entire weight of the panel, the magnet just has to keep the panel from tipping over. This allows you to use magnets that are weaker and easier to remove, sidestepping that problem.