What is a superconductor?

A superconductor is a material that offers no electrical resistance and expels magnetic fields.  All known superconductor materials are solids, and only exhibit superconducting properties when cooled to very low temperatures.

With the Type II superconductors used in these experiments, the magnetic field is ejected because of the Meissner effect.  Depending on how deep you want to go into the physics of this, read more about the Meissner effect and Quantum Mechanics to learn more.

Why do we need to use liquid nitrogen?

NOTE: When talking about temperatures this low, the Kelvin scale is often used.  The temperature in degrees Kelvin is simply the Celcius temperature plus 273.15.  For example, a room temperature of 20C is 293.15K.

Conveniently, YBCO was the first superconductor that can be cooled with liquid nitrogen, which boils at 77K (-196C).  This allows for (relatively) easier experimentation and use than previous superconductor materials.

The video below shows a ring magnet levitating over a series of superconductors arranged in a disc.

This next video below shows a superconductor "train" floating over a bed of neodymium magnets.  The train consists of a styrofoam box that contains two superconductor discs, with liquid nitrogen covering them.  The track is made of nine BZ084 magnets.

Why do they levitate?  How does it work? 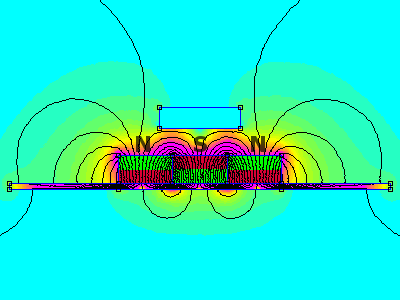 Superconductors repel magnetic fields due to the Meissner effect.  Near the surface of the superconductor material, small currents flow (without any resistance) that make an opposite magnetic field that repels the field from the magnet.

With the superconductor, we could get levitation to happen 1/8" away or 1/4" away equally well.  We also had to hold it there for a moment to get it stable.  Why does it levitate in a stable way?  Why doesn't the repulsion simply keep pushing away like a pair of magnets would?  We found that flux-pinning is a good explanation.

In the magnetic field diagram shown, the magnetic lines of flux flow from the north pole to the south pole, and do not penetrate the superconductor at all.

Warnings -- don't try this at home!

Here at K&J Magnetics, we're used to warning folks about how strong neodymium magnets can be.  Liquid nitrogen comes with a new set of warnings to be mindful of.  Lacking experience, we experimented with liquid nitrogen with the help of some folks from Air Products, who are quite experienced with handling this incredibly cold product.

If you experiment with liquid nitrogen, please consult an expert for compete safety instructions.  Seek help.  Don't try this alone.  Some pointers we observed:

If you are interested in more accessible levitation experiements, see our recent article on Diamagnetism and Levitation.