What is a tensegrity table?  What does it have to do with magnets? Is this a loophole we can use to get around Earnshaw’s theorem, and achieve levitation with a series of magnets?

As with many of our articles, this one started with a customer’s simple question: Can the strings in a tensegrity table be replaced with attracting magnets?  If so, how?  If not, why not?

What is a Tensegrity Table? 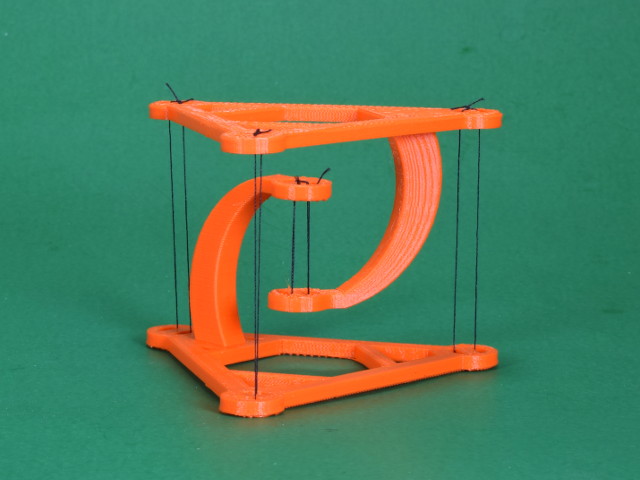 We hadn’t heard of them before.  Searching online revealed a number of great examples, small and large.  You’ll find quite a few pictures of awesome craftsmanship out there, from many folks making this novelty item.

To illustrate, we 3D printed an example ourselves.

This thing is so neat because, at first glance, it looks impossible.  How are strings holding up a weight without collapsing?  Strings can hold weight in tension (like hanging from a ceiling) but not compression (like a stack of books or a Greek column).  How is this even working?

The trick lies in those arms extending down, and how they reverse the direction of the tension of the center string.  Do a thought experiment while looking at those strings.  You’ll see that:

• If you tighten up the outer strings, that action will tend to pull the base and the tabletop closer together.

• If you tighten up the center string, that action tends to pull the base and the tabletop farther apart.

Because these forces are acting in opposite directions, they counter one another.  From the point of view of the top piece, the center string is trying to pull it up, while the outer three strings are trying to pull it down. 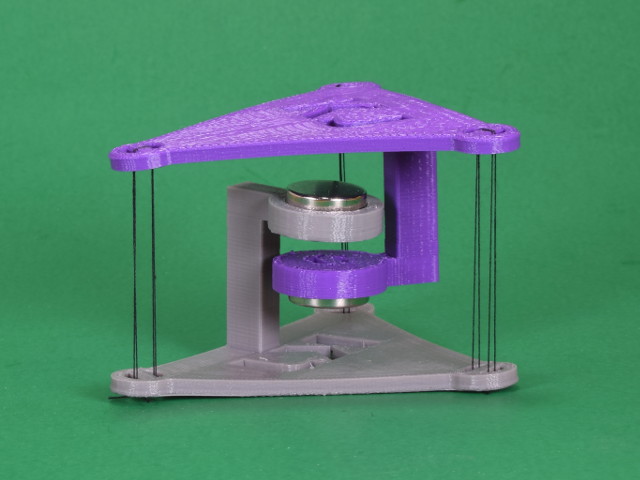 Let’s get back to the question that started us down this rabbit hole.  Can we replace the strings with magnets.  Is that possible?  Let’s start simple and do so in small steps.  We’ll start by replacing the center string with a pair of attracting magnets.

IMPORTANT: Just like the string we're replacing, these magnets are set up to act like a string in tension.  They are attracting towards one another, not repelling.

Like a regular, all-string tensegrity table, the magnetic attraction tries to pull apart the tabletop from the base.  The outer strings pull down to counteract that force, acting in a direction that tries to bring the tabletop and the base closer together.

The result is also a neat structure to look at.  Naturally, we like anything with magnets in it.  In practice, though, there are some downsides.

It doesn’t hold as much weight.  While the first example was limited by the tensile strength of the thread, this one is limited by the much weaker force of the magnets attracting across that gap.  While we could have increased the magnetic force by reducing the gap distance, it isn’t as sensational looking.

People also tend to think it’s not quite the same contradictory mystery that the string-only tensegrity table is.  They assume it’s using repelling magnets held back by a string.  That’s not true, and that wouldn’t be stable anyway. 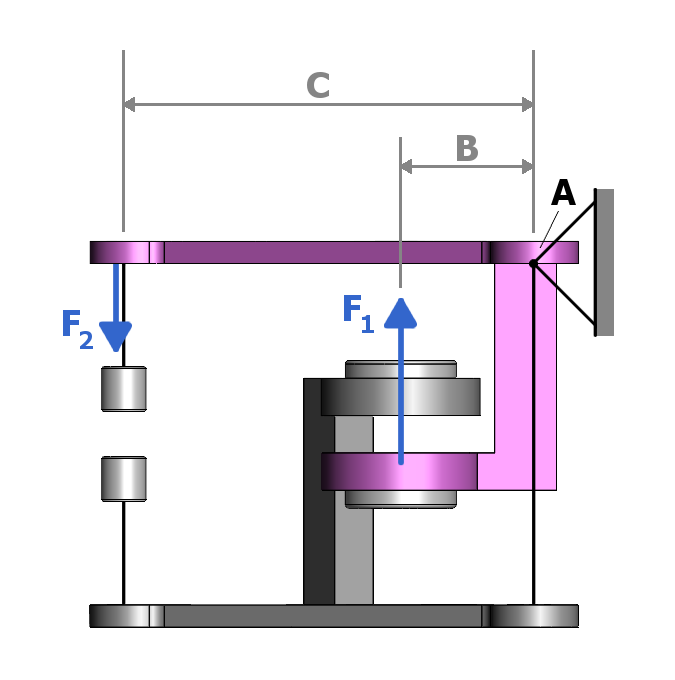 Let’s keep moving forward and take the next small step.  If the goal is to replace the remaining strings with pairs of magnets, let’s try replacing just one. Is that possible?

We think it isn’t possible.  Why not?  Well, in the more generalized sense, it’s not possible to create a stable, 3 dimensional setup with levitating magnets based solely on pairs of magnets.  This is the hard truth of Earnshaw’s theorem, discussed earlier in Pseudo-Levitation.

Let’s look at just a 2D force diagram of this table, and try to understand why.

In this scenario, we’re replacing the string on the left with a pair of magnets.  We set them so that they’re attracting towards one another, mimicking the string in tension.

Now consider just the forces on that upper, purple part.  For a moment, let’s just think of the strings on the right hand side as rigid, holding a point there fixed.  The rest of the part is free to rotate around that point.  It's labeled as point A in the picture.

For a static (staying still) scenario, the torques (or moments) rotating it clockwise or counterclockwise around that point must be equal.  The mechanical engineer writes this as, “the sum of the moments around point A must equal zero.”

The negative sign is because one torque is acting in the opposite direction.  This simplifies to:

This all seems pretty straightforward so far.  All we need to do is pick those new magnets on the string to be precisely the right strength when attracting across a gap to perfectly balance the force of those center magnets.  Easy, right?  Sadly, this is where that instability shows up. 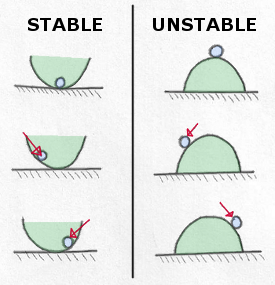 This section is repeated from our Diamagnetism and Levitation article.

Let's review the concept of static stability.  Stability refers to the tendency of a system to return to a starting position all by itself.  A classic example is the marble in a bowl.  In the Stable bowl, at right, the marble sits in the center of the bowl, at the bottom.  If you push the marble with your finger a bit to one side, the marble will tend to move back to it's original position.

Sure, it may roll back and forth a few times, slowly dampening out.  The key here is that the system tends to pull the marble back into the original position eventually.

The unstable system wants to find a stable position with the marble on the table, on either side of the bowl.

Back to Our Table’s Instability 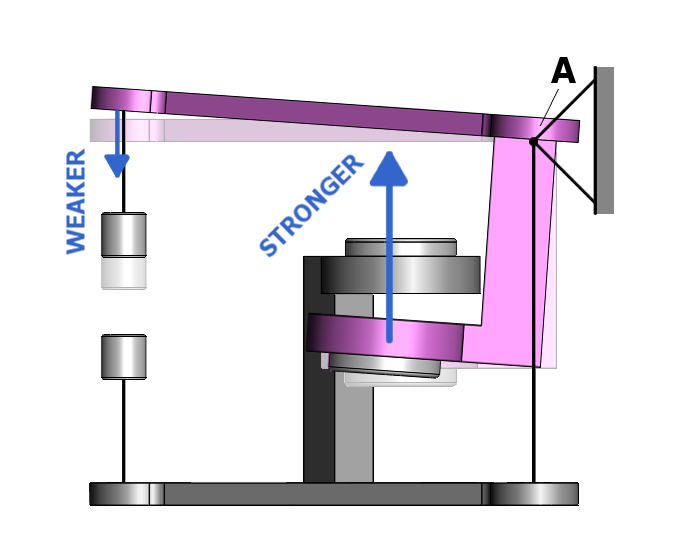 How do the forces change when the tabletop is rotated clockwise slightly? 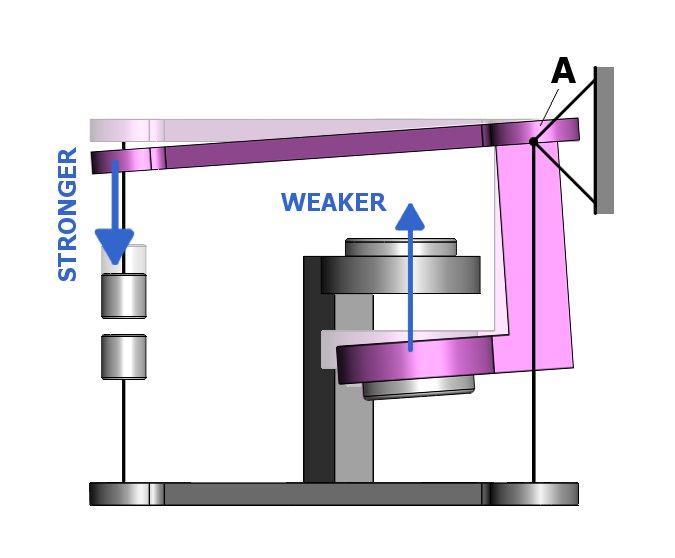 How do the forces change when the tabletop is rotated counterclockwise slightly?  What happens to the forces on our tabletop as we nudge it gently out of perfect balance?

If we rotate the tabletop a little bit in the clockwise direction, how do the forces change?

• The center magnets get closer together, increasing the force. The torque/moment twisting the part clockwise is stronger.

• The outer magnets on a string get farther apart, decreasing the force. The torque/moment twisting the part counterclockwise is weaker.

Therefore, once we nudge it just a tiny bit of balance in a clockwise direction, the forces tend to act to push it farther off balance.  This is just like that unstable ball sitting on an upsidedown bowl.

What happens to the forces if you rotate the part counterclockwise?  Pause and think through it yourself.

• The center magnets get farther apart, decreasing the force. The torque/moment twisting the part clockwise is weaker.

• The outer magnets on a string get closer together, increasing the force. The torque/moment twisting the part counterclockwise is stronger.

Again, a small nudge off balance makes the part move more, getting further imbalanced.  It isn’t stable no matter which way we push it.

No thanks, we’ll stop here.  Adding magnets to the remaining strings won’t solve this stability problem.  It only adds to it.

We demonstrate our attempts to try this out in our video on the topic.  It also includes some larger examples we constructed.

This has been a fun topic to explore, even though it’s such a strange, obscure object.  It’s not like we expect thousands of people to start building magnetic tensegrity tables.

If you are one of those people, here is the file you need for the 3D printed table held together with threads.  Here is the file for the table with DA4 magnets and threads.

Is all of this really relevant to anything?  In some ways, it sure is.  There are many structures in the world that use these tensegrity concepts.  We read about civil engineering feats like bridges and stadium domes that use these ideas.  There were also some related, more common applications that use pre-loaded members like the tensegrity table, from large cranes to the human spine.

It’s also another example of many questions that start with, “If I set up this complex magnetic structure, will it levitate (in a stable way)?”  We don't like saying that a thing can't be done, but it's often true for questions like these.  At least we were able to build some neat structures for this one! 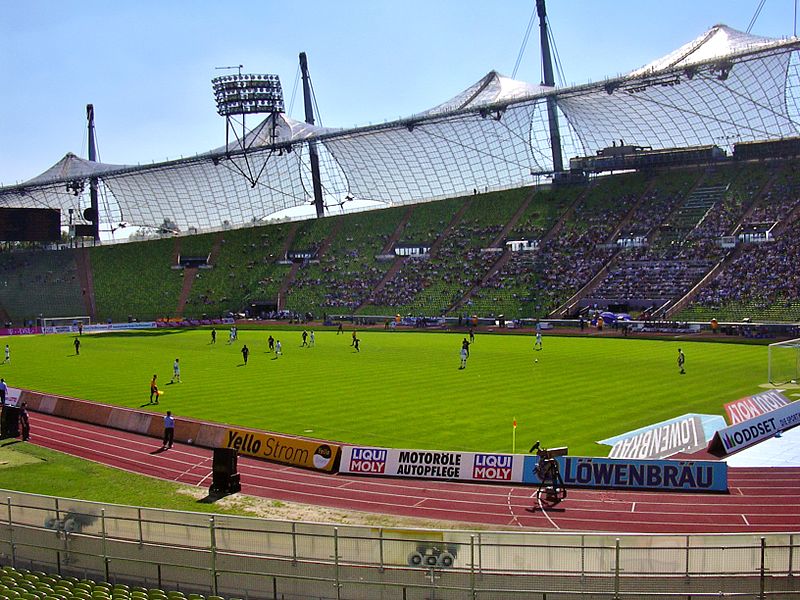 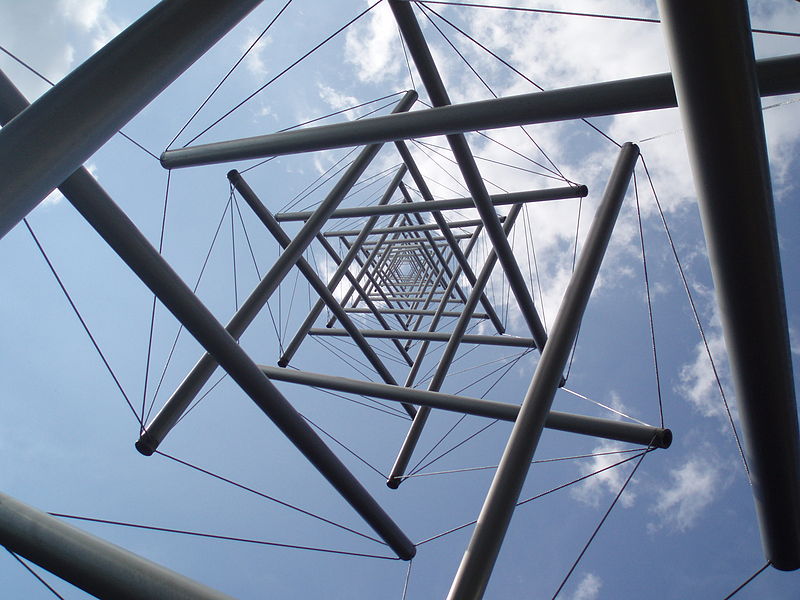