All About Magnetization Direction

What do we mean by a magnet’s Magnetization Direction?  Is it important?

The strong magnets found at K&J Magnetics are called sintered neodymium magnets,.  They are the most powerful type of permanent magnet available.  Sintered means the metal is pressed together at high temperatures in a very specific way to make a strong magnet.  You can learn a bit more about this process in How Neodymium Magnets are Made. 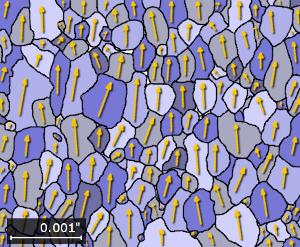 Depiction of Magnetic grains in NdFeB magnet, with arrows showing preferred magnetization direction of each grain

The key thing to keep in mind for this discussion is that these powerful magnets are formed with a preferred magnetization direction.  They are either pressed in the presence of a magnetic field, or undergo a second press (called die upsetting) that orients the magnetic domains in one direction.  The magnets are actually magnetized later in the process, long after they are formed.  Once a magnet is made, it can only be magnetized in that “preferred” direction.

You might think about it like a piece of wood, which has a grain running in one direction.

Why must neodymium magnets have a preferred magnetization direction?

Neodymium magnets are made this way because we want them to be as strong as possible.  If we made magnets that were just as easy to magnetize in any direction, they wouldn’t be nearly as strong.  Our magnets are typically made in grades like N42 and N52.  That “N” number relates to their maximum energy product, a measure of strength expressed in MegaGaussOersteds, or MGOe.  While N52 magnets have a strength of 52 MGOe, a magnet made to work in any direction might only achieve 10-12 MGOe.  That’s a lot weaker!

A magnet’s magnetization direction can not be changed once the magnet is made.  We are not able to change the direction of any of our stock magnets.

What’s the difference between axially and diametrically magnetized magnets?

Examples of axially magnetized magnets include D82 and D48.

Disc, cylinder and ring magnets are most commonly magnetized along their geometric axis.  That is, the north and south poles are located on the flat, circular faces.  This is called axially magnetized, because the magnetization direction is along the axis of the magnet.

What does this mean for a simple task, such as sticking a magnet to a steel refrigerator door?  A magnet will “want” to stick most with one of its poles touching the steel surface.  An axially magnetized magnet will tend to stick with one of the flat faces touching the fridge.  This doesn’t mean that you can’t stick it on its side (you can), but that it won’t be as strong this way.

A diametrically magnetized magnet, on the other hand, is magnetized across its diameter.  The north and south poles are located on the curved surface, at opposite sides.

Find a complete, pictoral summary of all our available magnetization directions for various magnet shapes on our Magnetization Direction page.

How can I tell the difference between an axially or diametrically magnetized magnet?

This can sometimes be confusing though, since you can get either type of magnet to stick together in the other direction.  It isn’t nearly as strong a hold, but they stick.

Another great way to discern the difference between the two is to roll the magnet across a non-metallic desk.  (We showed this before in the second video in our article, The Earth Is a Magnet.)  Diametrically magnetized magnets will tend to wobble, as if the magnet weren’t perfectly round.  What you’re actually seeing is the magnet’s tendency to align with the earth’s magnetic field.  Axially magnetized magnets won’t show this sort of wobble.

Why can’t I get a block magnet magnetized along the length or width?

You can, but we don't call it “magnetized through the length.”

We list our block magnet shapes with three dimensions, length x width x thickness.  We always list the magnetization direction last, as the thickness.  In most cases, this is the thinnest dimension.  We do, however offer a number of magnets where the thickness is not the smallest number.

Examples of this include:

Historical note: You may have learned about magnets by handling with “bar magnets,” which were magnetized along the long direction.  Back before neodymium magnets were invented (in the 1980s), ceramic and Alnico magnets were often made in shapes that were long in the magnetization direction.  This wasn’t done to help illustrate the concept (though it was helpful!), but because these older magnet types tend to demagnetize themselves if they’re not sufficiently long.  The main reason they were made long was to keep them from slowly losing strength.

You don’t need to make a neodymium magnet that long.  Because of their high coercivity (resistance to demagnetization), you can usually use shapes that are relatively thin compared to their other dimensions, and not worry about demagnetization.  That is why thinner shapes are more common.  While we do offer a few "tall" shapes, in many cases it makes more sense to use a thinner shape.

We are only able to offer block magnets that are magnetized along one of the three primary axes.  We are not able to make block magnets with an arbitrary or diagonal magnetization direction.

What magnets should I use for a magnetic, angular sensor chip?

This last section gets a little more technical.  It concerns a question we get from engineers trying to find the right magnet to use with a special type of magnetic sensor, which can sense the rotational position of a nearby magnet.

We did an article a while back about Reed Switches and Hall Effect Sensors.  It explains the basics of using magnetic sensors with neodymium magnets.  It’s a great reference on the subject of sizing a magnet to match a particular sensor and operating distance.  It only covers basic on-off types of switches, though, not the directional sensors that measure the angular rotation of a magnet. 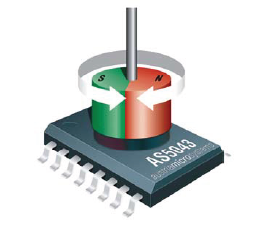 This image of sensor and diametrically magnetized disc magnet from ams (Austria Micro Systems) is typical.

Many of these rotation-sensing sensors include a similar schematic view in their datasheet, showing a diametrically magnetized disc placed over the sensor.  Many call for a 6mm diameter x 2.5” thick disc, though there’s nothing magical about this size (they just happened to test with that one).  Our similarly sized D42DIA magnet would also work well.  (You can't just use any magnet, though; read the specs of your sensor carefully!)

Showing it this way helps illustrate how you have to position the spinning magnet you’re sensing.  The poles have to be to the left and right, changing their position as you spin the magnet about its axis.  If you used an axially magnetized magnet, the sensor would not see a changing magnetic field and would not work.

Of course, there’s nothing that says you have to use a diametrically magnetized magnet.  It’s convenient to illustrate the disc this way, because it rotates about its geometric axis.  You could, however, just as easily use a different magnet type, as long as you orient it properly.  We show a few examples below.

What matters is that the magnetic field’s shape and strength is appropriate for your particular sensor and the operating distance between the magnet and the sensor.  These are suggestions from us, but be sure to verify proper operation in your application. 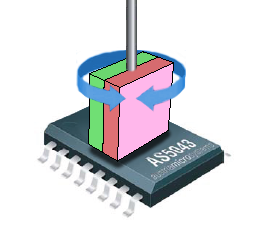 Sensor and B442 block magnet. 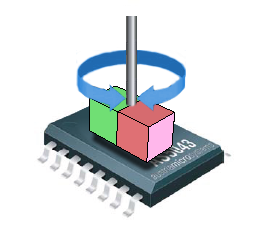 Sensor and B224 block magnet. 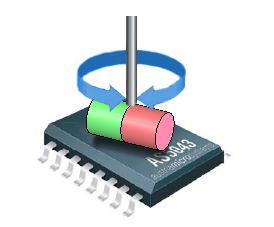 What diametrically magnetized magnet sizes are available at K&J Magnetics?

Our Magnet Summary page has a good listing of most of our available magnet sizes.  The lists are searchable and sortable, which is quite helpful. Type "DIA" (without the quotes) into the search box for the Discs/Cylinders or the Rings table.  When you do this, the list will only show part numbers ending in "DIA" -- the diametrically magnetized magnets.

UPDATE: Our Diametric Magnets section lists all the diametrically magnetized magnets we carry in stock.