Wow, you guys at K&J offer a lot of magnets.  What are they all used for? 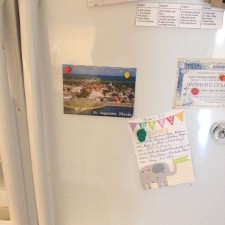 Magnetic Thumbtacks on a fridge.

Powerful neodymium magnets are used for much more than fancy fridge magnets.  In fact, magnets have permeated our lives so much recently, in ways that aren’t always obvious, that we are surrounded by magnets more than ever.

In this article, we’ll take a look at some of the amazing and unexpected ways that magnets have transformed modern life.  Rather than look at where magnets are used everywhere in the world, we’ll limit the discussion to magnets found in a typical home.

There are a lot of magnets in my house.

Before the middle of the 20th century, let's say about 1950, most people had only a few magnets in their homes. Today, that number is more likely in the hundreds.  That’s true even for readers like you who don’t work here at K&J Magnetics!  Where are these magnets hidden in your home?  What are all these magnets for? 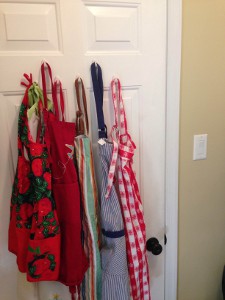 White HOOK-WHT hooks holding up a few aprons on a steel door.

Let’s check off this obvious category from the list first.  There are a number of fridge magnets we sell, like Magnetic Thumbtacks or other neodymium magnets used for fridge magnets.  You might also have a flexible magnet or two on your fridge, probably with an advertisement printed on it.

Let’s make this category even larger.  Let’s define it as anything where magnets are sticking to something in your house to hold stuff up.  Maybe you use a Magnetic Hook to hold up a decoration on your steel front door.  Maybe you use hooks to hold up aprons. 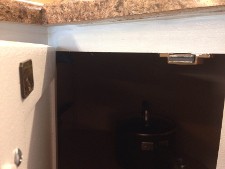 The doors on cabinets or other furniture doors often have magnetic catches or closures on them.  Usually, these are made with an inexpensive ceramic magnet sandwiched between two steel plates, which attract to and come into contact with a steel “strike plate” on the door.  While we're starting to see some closures made with powerful neodymium magnets, most are still using inexpensive ceramic magnets. 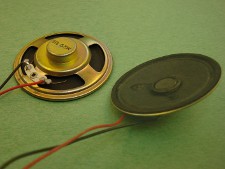 Most speakers are made with some kind of permanent magnet that interacts with a coil of wire (an electromagnet, really).  The audio signal flows through the wire, and moves the speaker.  The speaker moves air, making sound.  We demonstrated the basics of how a speaker works back in our Audio Speakers article.

How many speakers are in a home?  Count all the speakers: don’t forget radios, stereo systems, televisions, etc.  Count cell phone speakers, but not microphones.  (Most cell phone microphones are condenser/electret microphones, and do not contain a permanent magnet.)  Don’t forget the speakers in your car.  Count each ear-bud in any music playing device you might have.

An electric motor from a DVD drive

This is a huge category.  If you can think of something electronic that moves, it probably has magnets in it (not 100%, though).  The automatic windows in cars?  Each window has its own motor.  The tray on your DVD player?  Motors.

The popularity of magnetic tape recordings with VHS VCRs has declined, but our transition to DVDs and BluRay optical discs doesn’t mean we got rid of magnets.  The typical DVD player has quite a few of them inside, including a motor to spin the disc, a motor to open and close the disc tray, a motor to roughly position the read head/laser, and even a fine electromagnetic control of the read head.  That's at least four magnets right there in one DVD player!

If your computer has a disc reader/writer in it, figure that has another 4+ magnets.

What else in the home moves with electric motors?  The ice dispenser in a fridge.  The garbage disposal.  A trash compactor.  The spinning tray in a microwave (in addition to the big magnet used in making the microwaves).  Electric fans, the blower in a hair dryer, fans and blowers in a refrigerator.  A garage door opener.  The pump in an aquarium.  The rotating parts of washers and dryers.  Blenders and mixers.  The list goes on and on, and most of these motors have permanent magnets in them.

In a car, all sorts of things are controlled by motors: power windows, various pumps, windshield wipers and more. 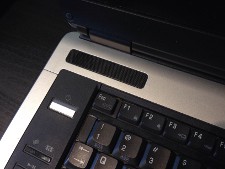 A computer’s hard drive has a number of magnets in it as well, in addition to being a magnetic storage device.  (Let’s keep this number reasonable, and not consider every one and zero stored on it as an individual magnet, even if it is technically true.)  Still, the hard drive has magnets for the motor to spin the disc and another magnet to control the position of the read heads.

Have a DVR?  That’s got a hard drive in it too.

Laptop computers and flip phones use a magnet to sense when it is open or closed.  See Reed Switches and Hall Effect Sensors for more info on how they work.

In the garage, a pick-up tool that is sometimes handy for picking up dropped screws and bolts.  A D6C and a D8APC-BLK cylinder in the toolbox for magnetizing screwdrivers, locating studs, etc.

What have we missed?  If you can think of any more magnets commonly found at home, email us and we'll add it here! 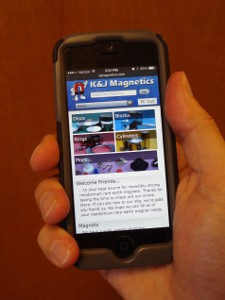 (How do you take a picture of the Internet?)

Other magnetic stuff, which might not include permanent magnets

Since we’re in the business of selling magnets, this article focused on permanent magnets and their uses.  This ignores the much larger world of magnetic materials, used in everything from transformers to hard drive discs.  Even if they aren’t permanent magnets, there’s an even larger number of devices that power our technological lives based on magnetism.  Maybe that’s a list for another day…

Where are magnets used?

What applications use all the magnets?

We found some varying statistics, depending on what source you read.  Of course, we don't know where all the magnets we sell actually get used, so consider these numbers as approximate.  The numbers in the colored chart are a fair estimate.  It shows where newly produced magnets end up getting used.

Looking in your house for only the places magnets are used listed in this article, from motors to speakers, how many magnets can you count in your home?  I started losing track somewhere above 150...