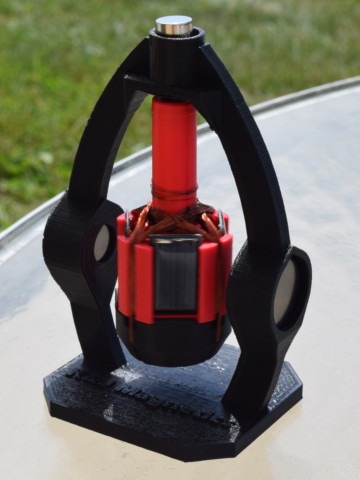 Some time ago, we had a great time making a two-part series describing a Mendocino motor.  It’s a simple demonstration motor that spins, powered by sunlight.  Made with magnets, insulated wire and a few solar panels, it’s a really cool project.

Over the course of explaining and demonstrating how it works, we created a rough prototype to demonstrate the pieces.  It wasn’t pretty, but worked well enough to show the concepts.  Since then, we’ve been asked about how to build a better one, and what magnets should be used.

What did we learn last time?

Our original motor, made with wood, tape and rubber bands!

The demo we built last time was okay, but there are things we could have done better.  We used a lot of wire, which resulted in a really heavy rotor.  Copper is heavy – who knew?  It was hard for this heavy rotor to get started.  Less wire would have been better.

The other problem we found was that the levitating rotor wasn’t very stable.  When spinning at slow speeds, the rotor tended to wobble quite a bit.  If the wobble motion got too large, it could throw itself off.  Unless you build something to constrain the rotor from flying off, this isn’t something that you can build and expect to just leave on your windowsill. 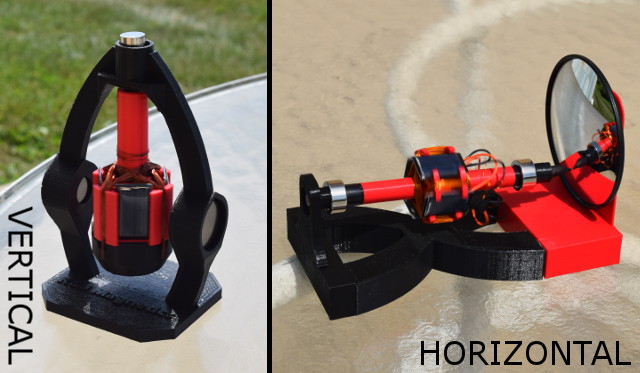 In proposing a better design, we found ourselves divided into two camps.  One side wanted to make a vertical motor configuration, where the spinning rotor hangs down.  The other side wanted to stick to the horizontal configuration with its pseudo-levitation, arguing that the cool-factor of this was an essential part of the demonstration.

In the end, we built examples of both.  We found pros and cons for both.

Show me the Videos!

Here's the more common Mendocino motor, with the rotor axis in a levitationg, horizontal position.

Why Does it Spin?

There’s a great technical explanation about how and why these things spin in our original Mendocino Motor article.  Here’s the short explanation:

This explanation is true for both the vertical and horizontal motors we made.

Which orientation is better, horizontal or vertical?

Even after building these two working motors, opinions here are still mixed.  The vertical setup is easier to recreate, more forgiving, and works quite well.  For something that’s going to sit on a windowsill and just run, however, it’s often not facing in the right direction.  The horizontal motor is more apt to just spin as long as sunlight is shining in the window.

If you’ve built one of these motors, please let us know.  Share your pictures, and maybe we’ll add some of the best here! 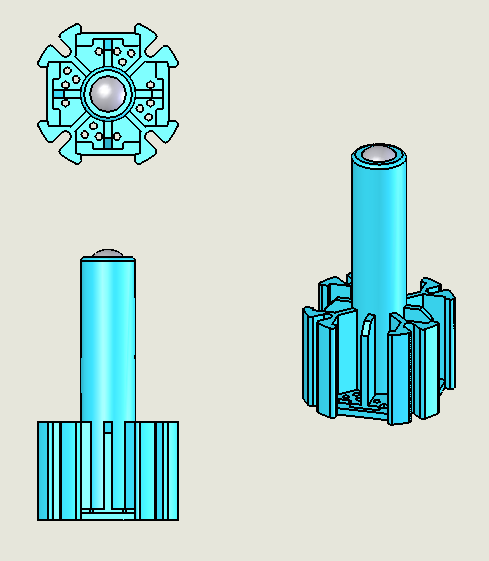 1. A single, 3D printed rotor has all the features we need. In the terminology of electic motors, the "rotor" is the part that spins.

In the picture, the plastic rotor is shown in blue. A 1/2" diameter steel ball, NSB8, is shown inserted up inside the hollow cylinder. This will stick to another steel ball above it in the final assembly, making a low friction support. 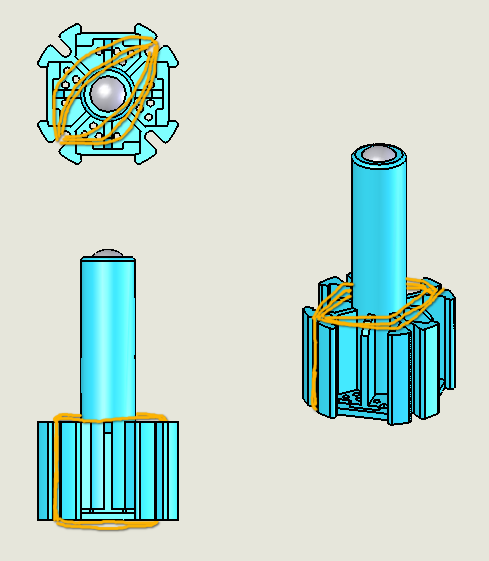 2. We wound 100 turns of 30 gauge copper wire around the rotor structure. Both ends of the wire were left dangling out holes in the bottom. 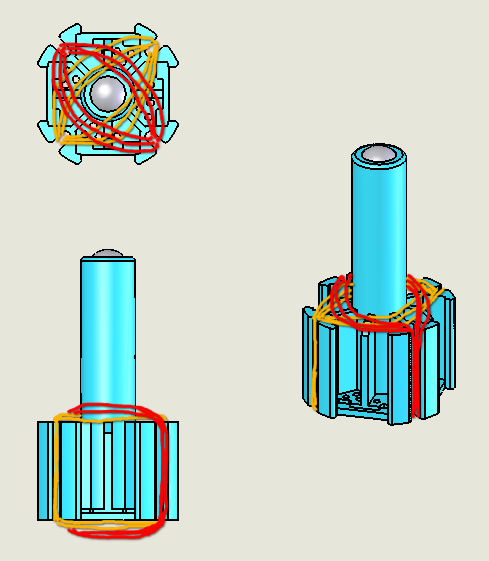 3. A second 100-turn loop of wire is wound around the rotor, set 90 degrees turned from the first loop. Again, the ends of the wire are left dangling at the bottom. 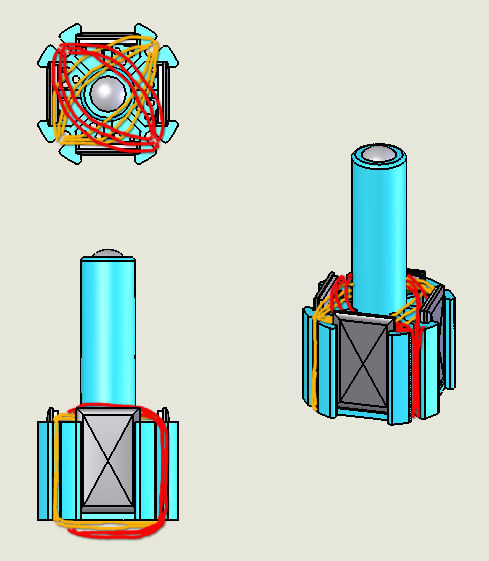 4. The four solar panels are slid into place. Their two wires, red and black, are shoved through holes at the bottom of the rotor structure to stick out the bottom. 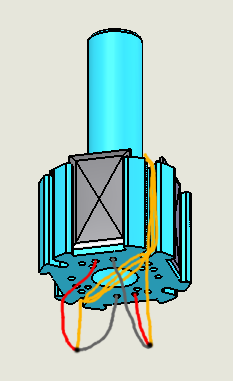 More explanation can be found in our earlier article. 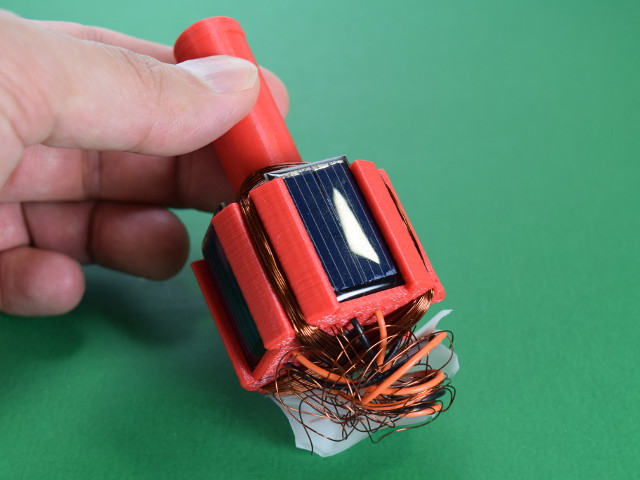 6. All wired up and it's a functional rotor.  The mess of wires at the bottom are unsightly, and might produce a lot of air resistance when spinning.  We left a lot of wire length dangling to make connecting them together correctly a bit easier. 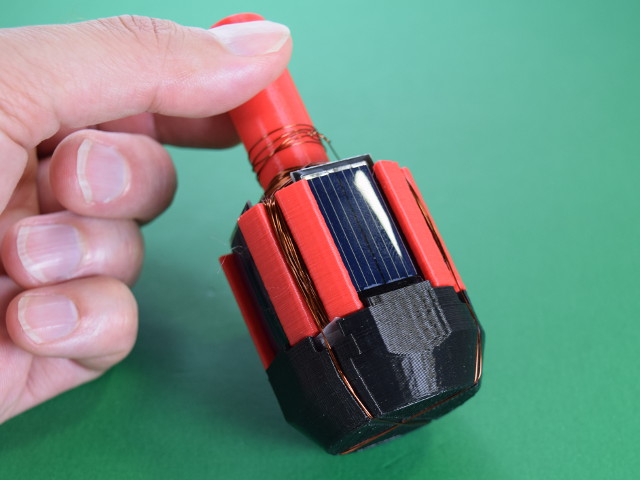 7. To make the appearance prettier, a simple plastic cap is attached to the bottom. This effectively hides the wiring mess, for a much neater appearance. 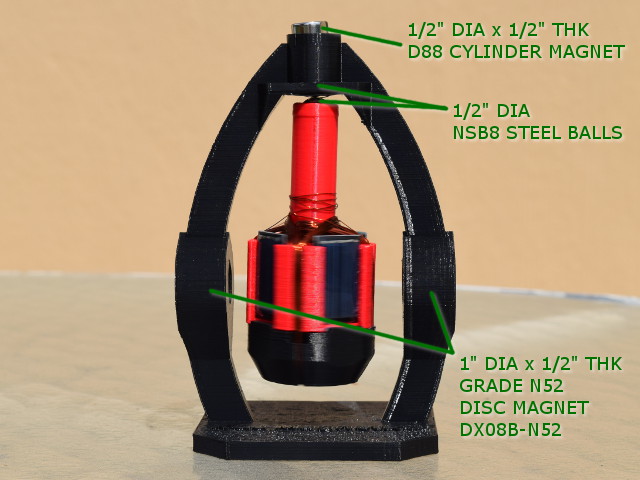 8. A frame holds the spinning rotor in place, and holds two strong magnets on either side that provides a strong magnetic field in the center.

In the top of the frame, a 1/2" diameter steel ball is dropped into the top (not visible). A strong, 1/2" diameter x 1/2" thick D88 magnet is set on top of the ball, sticking together. This makes enough magnetic attraction to the steel ball in the rotor, so that the steel balls stick together. We like this solution since it minimizes the contact area.  It doesn't have spinning parts rubbing against a magnet. Steel balls are a lot tougher than neodymium magnets!

Two powerful 1" diameter x 1/2" thick DX08B-N52 magnets are set on either side of the rotor, attracting towards one another. This provides a strong magnetic field where the rotor is, in a fairly uniform direction.

9. This cutaway view shows how magnets and steel balls at the top combine to make a low friction joint that rotates freely.

A 1/2" diameter NSB8 steel ball is dropped into the top. A strong, 1/2" diameter x 1/2" thick D88 magnet is set on top of the ball, sticking to it. This makes enough magnetic attraction to the steel ball in the rotor, so that the steel balls stick together. We like this solution since it minimizes the contact area.  It doesn't have spinning parts rubbing against a magnet. Steel balls are a lot tougher than neodymium magnets!
< >

In this configuration, the spinning rotor hangs down, making it quite stable.  Even if uneven forces push it to the side, gravity tends to keep it hanging down.

Cycle through the pictures to check out our design.  We used 30 gauge magnet wire and some inexpensive solar panels from Jameco, which had dangling wires included.  They aren't the biggest, but they're affordable.  Plus, they come with two wires dangling off, so that no soldering was required!

The structure was printed on a 3D printer.  It's a great way to create parts that are accurate and balanced well, though not strictly necessary.  You could build a similar device with other materials for your own project.  If you'd like to use our 3D model shapes, you can download them here:

In bright light or strong sunlight, this motor works quite well.  To get it to spin in moderate sunlight, we used some very powerful magnets on the sides.  The 1" diameter x 1/2" thick DX08B-N52 discs provided a strong field in the gap between them.  Be careful handling powerful magnets this large!

This thing spins great.  It’s a wonderful demonstration that gets a lot of oohs and aahhhs.  That said, there are still some drawbacks that we’d love to improve: 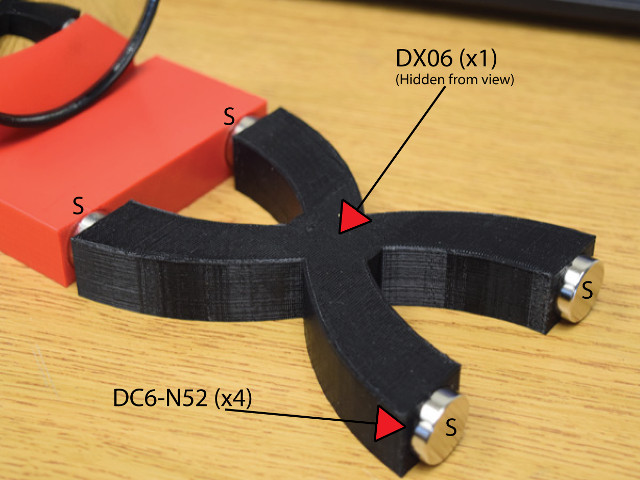 1. The base of the motor has four DC6-N52 disc magnets. These are the base of the pseudo-levitation scheme that will levitate the spinning rotor. To learn more about how this works, find a more detailed explanation in our Pseudo-Levitation article.

A mirror provides a vertical, low friction surface as a wall for the spinning rotor to lean against. 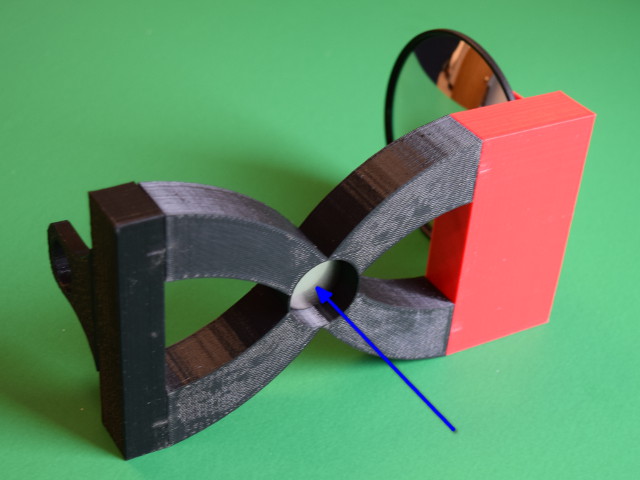 2. The base also contains a 1" diameter DX06 magnet, oriented vertically. This provides the magnetic field through the center of the spinning rotor. 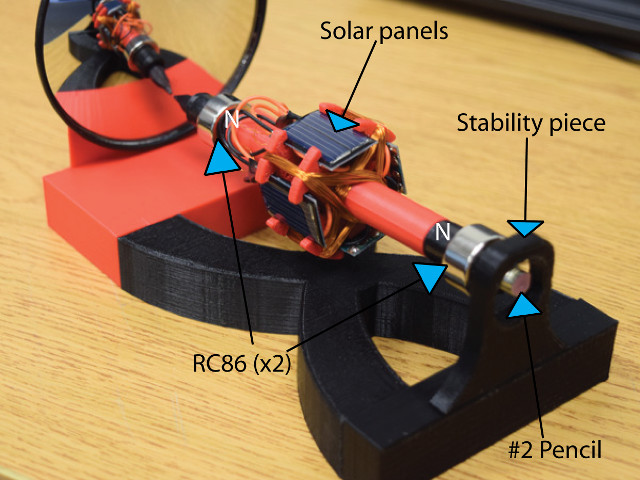 3. Shown with the floating rotor in place, there's a lot to see in this picture. The base has a "stability piece," which prevents wild gyrations of the rotor.

The center shaft of the spinning rotor is made with a common pencil. It's a nice, straight axle to work with, and comes with a low friction graphite tip!

At either end of the shaft are RC86 ring magnets, pressed in place over the shaft's 3D-printed body.  When set with their poles pointing in the same direction as the two magnets in the base below them, a repelling force is felt between them.  This is what holds up the rotor.

In the middle of the rotor is an assembly of four solar panels and two windings of copper wire. This construction follows the same idea as described earlier for the vertical motor.
< >

Our earlier horizontal Mendocino motor was constructed out of magnets screwed to scrap wood.  It was far from perfect or stable.  We assumed that much of the stability issue could be solved by holding the magnets in a more square, stable, tighter toleranced and repeatable way.  Armed with a 3D printer, we figured we could print a base to hold the magnets exactly where we wanted them.

Back when we first described these motors, we dedicated the whole first article to describe how the floating rotor is held, balanced and supported.  It’s a touchy thing, requiring the right magnets and distances to be stable.

In this round, we found that even with a higher precision setup, getting it to balance was still challenging.  Don’t expect to construct one of these things and have it just work right away.  It takes a lot of fiddling with the positions of the magnets to get things just right.

Here are the 3D model files you see in these photos:

You'll also need the mirror, the pencil, the 30 gauge magnet wire and the magnets:

After getting the balance right, we ended up with a really nice result.  It looks great and performs well.

Ultimately, we still aren’t 100% happy with the stability.  Like many magnetic levitation ideas, this stuff is harder than it looks.

Left alone, the rotor can wobble enough during startup to break free and slam to attract to the base magnets.  To address the problem, we added a feature that constrains the end of the rotor.  It’s a small detail, but an important one for safe operation.  It prevents the floating part from flying loose and damaging anything.