Magnets can be used to hold a door still at any position, even allowing swinging both ways if there isn't a jamb/stop.

While our website has a lot of great information about pull force, there are still many unanswered questions.  What if I have two magnets facing one another across a gap?  What force is required to slide them apart sideways?

First, let’s consider a more common scenario.  Imagine a swinging door or gate that bangs against a stop.  Put a magnet on the door and a magnet on the stop.  The north pole of one magnet attracts to the south pole of the other.  The force required to pull them apart is Pull Force, Case 3.  Easy as pie.

Now let’s look at the sideways case.  Remove the door stop and let the door swing both ways.  What if you have a magnet stuck on the bottom of the gate that attracts to one on the ground?  Or one on the side of the door, attracting to another on the frame?  The two magnets are separated by a small gap.  They pull towards one another, but that’s not the answer we’re looking for.  How much force is required to open the door, moving the magnets in a shearing motion? 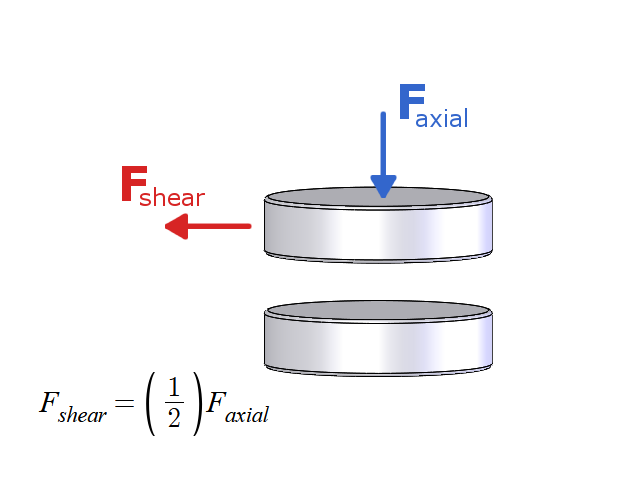 The shear force is less than the axial force.

We love using our online Magnet Calculators to answer many magnet questions, but they are silent on this one.  They don’t mention anything about shear force.

As a rough rule of thumb, we’ve always estimated the shear force at around half of the attraction force.  Is this correct?  Is that a reasonable estimate?  Let’s test it and find out.

We're ignoring friction, which can also play a big role in some shearing situations. 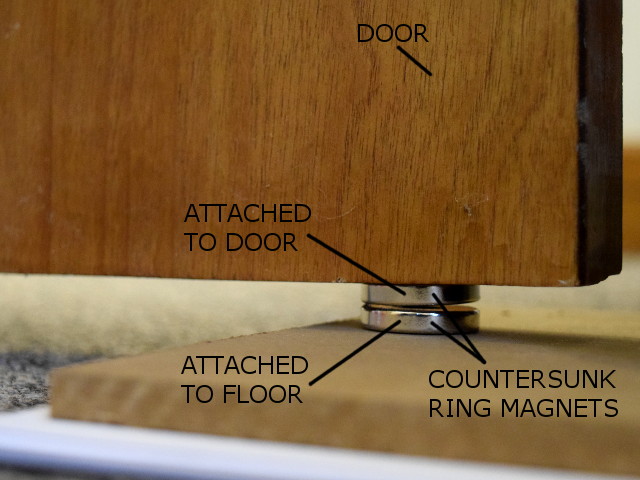 We started out by attaching a countersunk, 1” diameter RX033CS-N ring magnet to the bottom of an interior door.  We placed a second magnet (RX033CS-S) on the floor temporarily, holding it there by standing on the board it was attached to.  We adjusted the height of the floor magnet to get it close to the door magnet, but not quite touching.

This is exactly the kind of scenario that brought up this question, putting magnets on a door.

We also built a smaller, tabletop test rig to simulate the same motion.  It enabled us to more easily test a few different magnet sizes.

Using our test rig, we measured shear force for a few different magnets and distances:

We found that most shear forces were right around half of the predicted axial force.  It’s a decent estimate.  One of the magnets was a little stronger than expected, but not too far off.

We also ran a series of simulations to cover a broader range of magnet sizes and gaps.  Practically all of those theoretical results landed in the range of 40-75% of the axial force.  With that data, we’re comfortable believing the 50% estimate is a good, conservative bet. 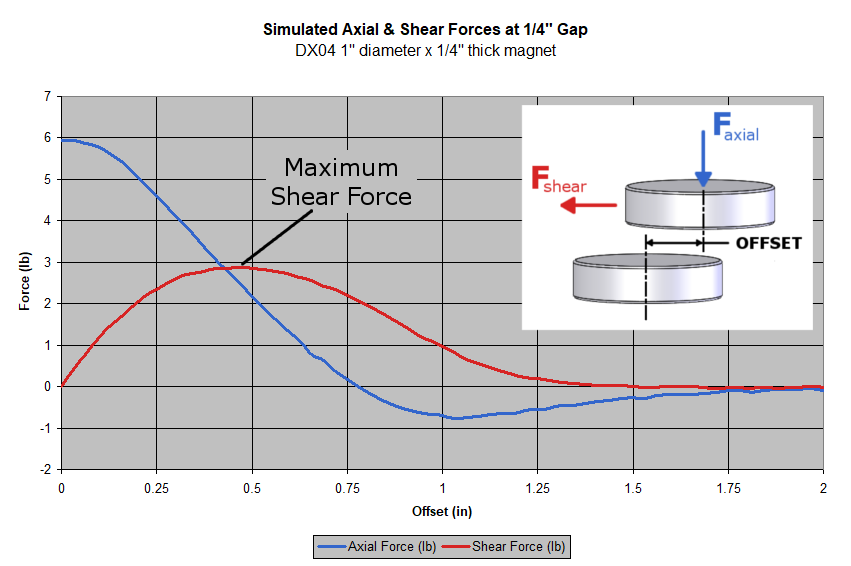 This graph of simulated magnetic forces between two DX04 magnets show that the maximum shearing force occurs when the two magnets are about 1/2" offset.

What we love most about building prototypes and testing are the unexpected discoveries.  While testing one problem we’re thinking about, we usually learn about another that we didn’t even think of.

Since the centering force drops to zero when the magnets are aligned, the door bobs back and forth for a while when it snaps into place.

We also didn’t think too much about just how strong the regular, Pull Force, Case 3 style attraction is.  If we want the door to require 10 lb of shear force to open it, we’re going to have 20 lb of attraction between the magnets.  This places a big load on the hinge and door frame.  It’s like hanging a 20 lb bag of groceries on the doorknob.

This didn’t matter much on the full-size door we tested.  It did, however, require us to stiffen up our miniature testing door.  Without help, the structure bent quite a lot. 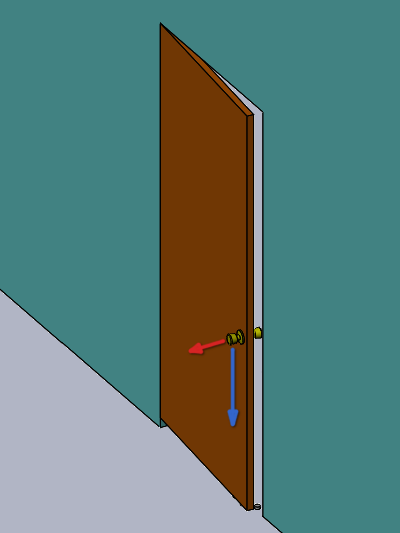 The magnetic force pulling the door down is about twice as much as the required opening force.

Consider the easily attached Countersunk Rings or Countersunk Blocks for your own projects like this.