Magnetic Poles are a Myth 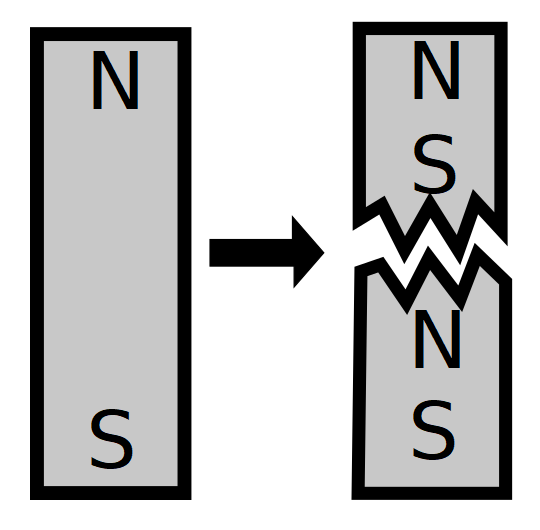 If a bar magnet is cut in half, it is not the case that one half has the north pole and the other half has the south pole. Instead, each piece has its own north and south poles. --Wikipedia: Magnetic Monopole.

Consider a simple cylinder magnet.  The D4X0-ND is 1/4” diameter x 1” tall.  The north pole has a dimple on it.  We say the magnet has a north pole on the dimple end, and the south pole on the opposite end.  What does this really mean?

Labeling the poles is a handy way of thinking about a magnet.  It describes how we expect it to behave.  If we hang the magnet from a string or float it in water, it acts like a compass.  The north pole points in the general direction of Canada from here in the US.

It also describes how it will behave with other magnets.  A north pole will attract to a south pole.  Like poles placed near each other will repel.

This polarity is often represented by coloring each half of the magnet a different color to denote the north and south poles.  We even sell a few magnets colored like this, such as the D84PC-RB and D68PC-RB.

Here's the supposed mystery: if we break a tall cylinder magnet in half, why do each of the halves then have a north and a south pole?

Poles are a Construct

Poles describe how a magnet behaves, not what it is.

All this business about the poles is a construct.  It’s made up.  It’s a helpful crutch to think about how magnets behave.  It is not, however, a good description of what the magnet actually is.

There are no physical differences between the top and bottom halves of the magnet.

What Magnets are: Magnetic Domains 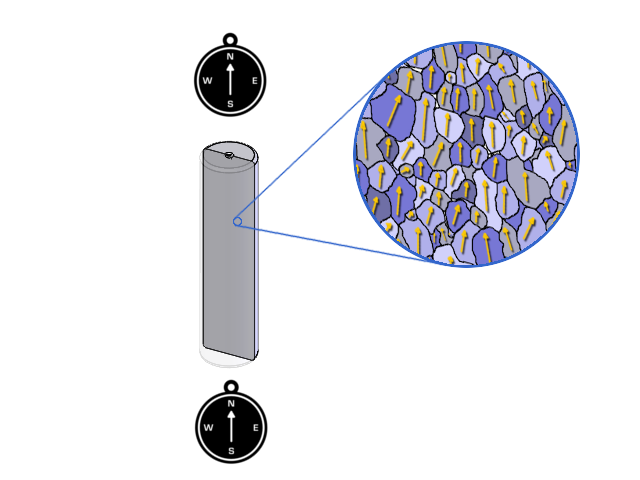 A D4X0-ND cylinder magnet is made up of many tiny magnetic grains, sintered together.

If you zoom way in on a sintered neodymium magnet, you find that the material is made up of a bunch of very tiny magnetic grains or domains.  Each grain is like a tiny magnet.  The whole magnet is made of many grains of magnetic material squished together.  Each grain is magnetized in a single direction.

If we slice one of those D4X0-ND cylinder magnets down the middle and map it with an electron microscope, the pattern of grains with their magnetization direction all point in roughly the same direction, parallel to the axis of the cylinder.  (That’s why we call it axially magnetized.)

Zooming back out, we can measure magnetic field direction around the magnet, shown with a compass in the image.  Instead of saying the magnet has a north and south pole, we might more accurately say that all the little bits of magnet material add up to single magnetization direction, pointing up in this depiction.

Wait a second – How do pole identifiers work? 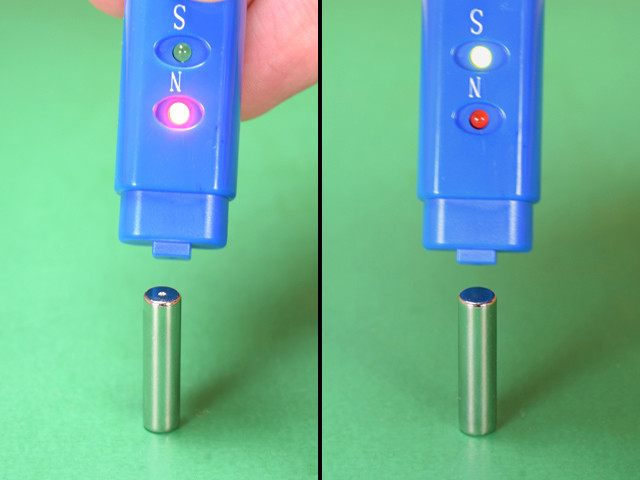 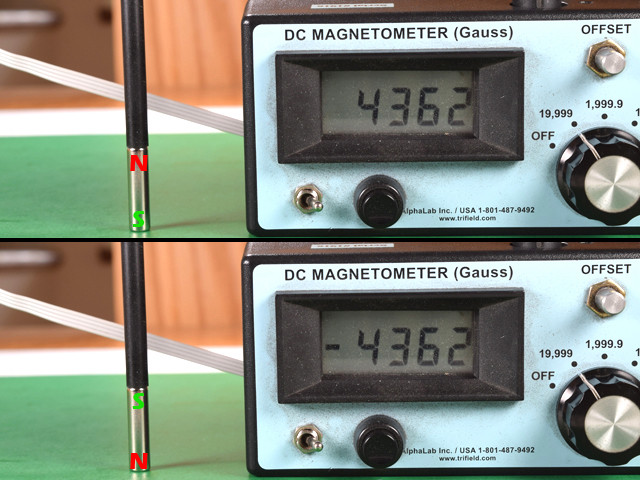 A magnetometer senses the same field, showing the direction as a positive or negative number.

According to this pole-less way of thinking about magnets, we see that the field direction both above and below the magnet faces up.  Why then does the EPID2 Pole Identifier easily detect the north and south pole?

It’s all about the field direction and how you hold the measuring equipment.

The same is true with other measuring devices.  A magnetometer shows the field strength as positive with the probe held above the north pole, and negative above the south.  Of course, simply rotating the measurement probe around 180 degrees above the same pole will produce the opposite result.  Measured direction depends not just on where you place the probe, but on which way it faces.

Two Out of Three So Far 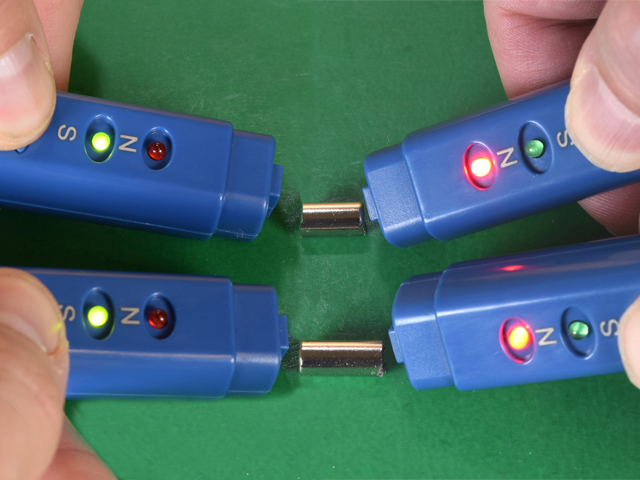 Both halves of a broken D4X0-ND cylinder magnet show a north and a south pole at either end with the EPID2.

With this modified way of thinking about poles and magnetization direction, questions 1 and 2 seem to answer themselves.

How does each half of a broken magnet each get a north and a south pole?  It’s easy, because each half is just like the original – an non-varying length of magnetic material all magnetized in one particular direction.  There’s no physical pole-stuff in them, before or after you break it.

Where is the line between the north half and the south half?  There isn’t one.  That coloring scheme is just a way to depict the magnetization direction, not an indication of any physical boundary inside the magnet.

What is the tolerance of a magnet’s magnetization direction? 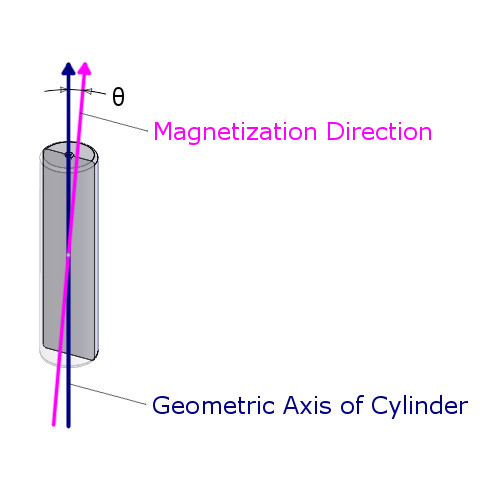 The angle between a magnet's geometric axis and magnetization direction

Yes, this angle has a tolerance, a generally accepted range for the angle between the cylinder’s axis and the magnetization direction.  For sintered neodymium magnets, this number is typically within a few degrees.  Let’s say less than 5°.

Why is this so?  Again, recall that a magnet is a squished together (sintered) collection of tiny magnetic particles (grains).  The magnetization direction of all the individual grains are not all perfectly aligned.  Each grain is off-axis by some amount.  The total magnetization of the magnet is the sum of all those little bits of magnetization.  Since some of those tiny arrows are pointing slightly left or right, the off-axis magnetization components tend to cancel each other out.  When this cancellation doesn’t quite sum up to zero, you get a combined magnetization that’s slightly off-axis.

Incidentally, this misalignment of the grains is one of several reasons why neodymium magnets can’t be made with a theoretically perfect N64 rating.  Some of the strength is lost to grains slightly canceling each other out.

How do you measure the magnetization axis? 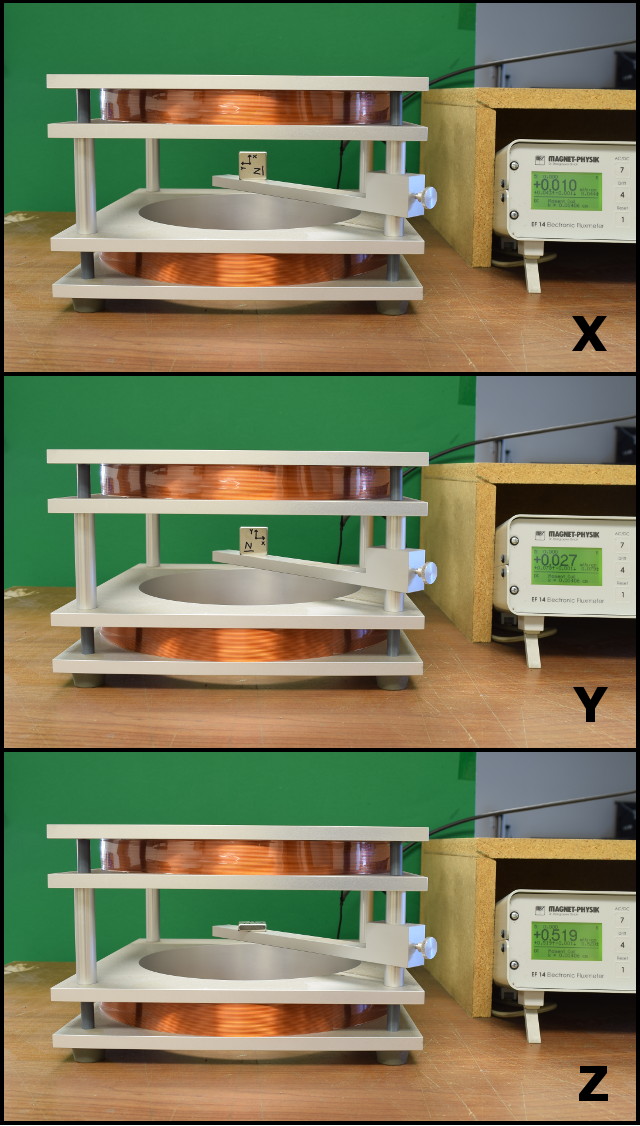 Measuring privileged angle with a fluxmeter and Helmholtz coils.

We use a fluxmeter and Helmholtz coils to measure the overall strength of a magnet.  When rotating a magnet around in the middle of the coil, the fluxmeter reads the current induced in the coils.  Some fancy electronics turn this into a value for magnetic flux.  A little math converts that data to a number expressing the magnetic moment, expressed in weber cm.  It’s a great quality control check.

If I stick a theoretically perfect magnet on its side, I should see zero on the meter, since there’s no overall magnetization in that side-to-side direction, up-down in the coils.  In practice, if the magnet’s magnetization direction is off by a degree or two, there is a small amount of flux seen by the coil.

By measuring the flux on the primary (pole) axis and two others, we can compute the angle of that magnetization vector.  This is sometimes called the privileged direction.

To put some numbers to this discussion, we measured a single BX0X04 block magnet.  It worked out to just a bit over 3°.

Let’s see you measure it without that fancy fluxmeter!

Measuring privileged angle with a DIY sensor and Arduino.

For these articles, we like to experiment with the simplest electronics we can get our hands on.  It’s a way of making the thing we’re studying a bit more easily understood and accessible.  We don’t think all our readers should go out and build the device that follows.  It’s just an interesting investigation to inform your thinking.

There isn’t a universally agreed upon definition for how to measure the magnetization angle.  How you measure it might depend more about your application and how you’re using the magnet.  Let’s consider two possible definitions:

We pulled out our little Arduino and magnetic sensor used in our recent article about Shipping Magnets.  With the help of a 3D-printed test rig, we measured the field at 12 points around a circle (with a radius of 6 inches) around a BX0X04 block magnet. 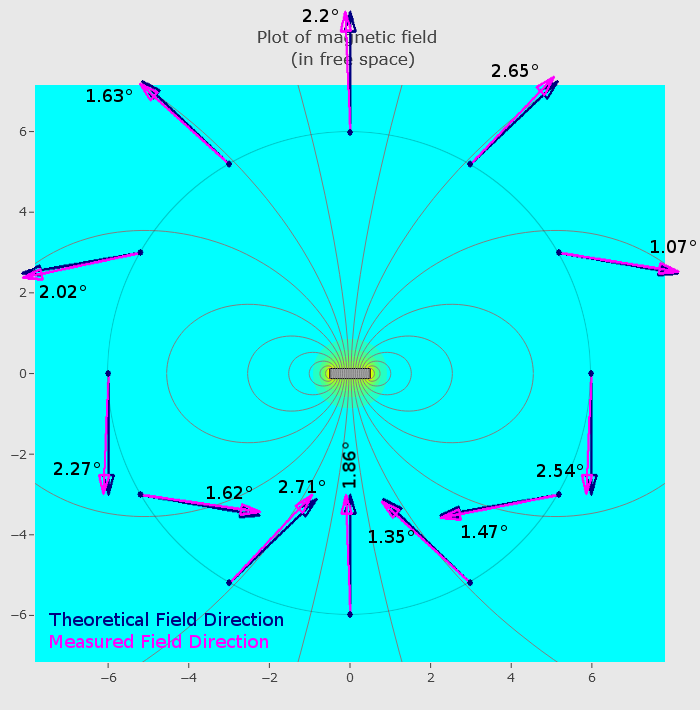 Overall, the measurements averaged to an error of just over 2 degrees, in the same direction we originally measured with the fluxmeter.  It’s not a perfect match, but within 1° is pretty good for our rough experiment!

In the vast majority of applications, the small angle of magnetization direction error doesn’t matter.  Sticking a magnet to a fridge?  It still sticks strongest on the pole faces.  Small changes in magnetization angle don't seem to affect pull force in our tests.

Designing a magnetic sensor to switch off a laptop when it closes?  The fudge factor of extra strength normally included for tolerances and temperature variation more than compensates for this small deviation from perfection.

Putting magnets in a brushless motor?  The steel rotor and stator guide the magnetic flux anyway, so small errors in magnetization angle don’t change the results much at all.

It’s an interesting thing to think about, but usually doesn’t affect too much.