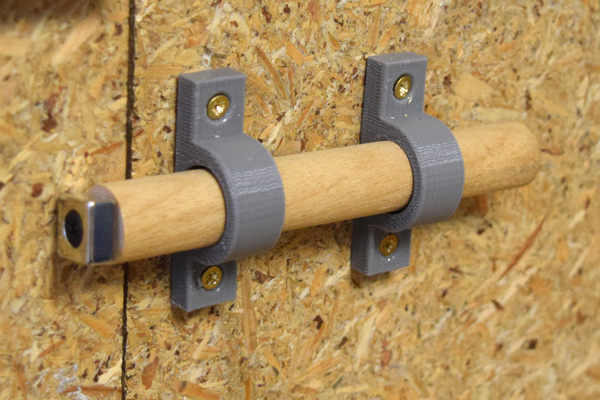 A hidden magnetic latch keeps the kids out of the cookies

Last month we looked at two different magnetic locks that are commercially available. We talked about how they work and what magnets could be used as the “key”. Read that article here.

But what if I want to make my own, custom, hidden magnetic locking system? Good question! This month, we’ll take a crack at making our own and put them to the test. We'll also try to answer some common questions about what magnets to use for this sort of thing.

Let’s give our engineers some parameters to work with… 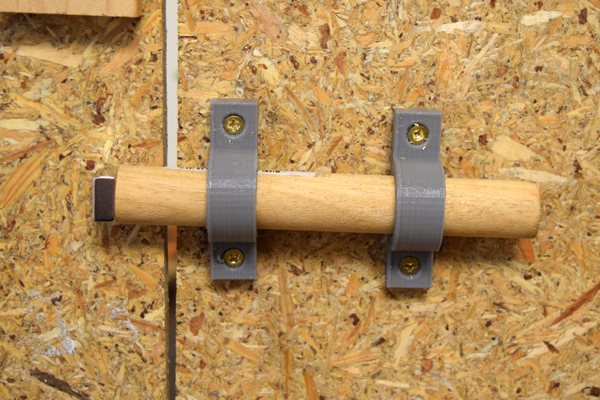 The sliding latch in action!

The first design we came up with is quite simple...it consists of a wooden dowel rod with a magnet fastened to the end, sliding through some brackets. We used some 3D printed brackets for the initial design, but also quickly made brackets from some thin aluminum material we had lying around.

This design seems popular among our customers, too. We’ve heard from several folks who’ve made hidden sliding latches with our magnets. The key to this simplistic design is to oversize the bracket holes a bit, to allow the rod to move freely. This allows us to use many different magnet combinations.

In our design, the wood thickness is about 3/4” - we found that a B848CS on the dowel and an XLTK-BLK thumbtack was a decent combination. They had enough force to slide the dowel easily, but not so much that it was difficult. It only takes about 0.15 lb of force to slide this latch. Sometimes, the latch would get stuck in the open position and the XLTK-BLK wasn't quite strong enough. We added a DA2 to the thumbtack and that helped eliminate the issue.

If making a hidden latch, keep in mind that the sliding force between two magnets is about half of their listed pull force. You can use our calculator to estimate the pull force over a distance.

What kind of force feels best? This is a loaded question, since it could be different for anyone and it can also depend on the friction of your system. In our design, anything over 0.5 lb of sliding force felt a bit excessive.

We have a few different rotating lock designs. They are both relatively simple – that is the goal!

This first design is fastened to the top of the door with a screw and the screw acts as the axle on which it rotates. There is one RC24DCS fastened to one side of a piece of scrap wood, which causes the wood to stay in the “locked” position – the offset weight falls down, causing the lock to be upright. The lock is positioned so that when it is upright, it overlaps the gap between the door and the frame.

We used a DC6 on the outside to rotate the lock to its “open" position. It works pretty flawlessly! This combination of magnets has a good feel over the 1 1/8” of wood. We estimate the pull force between the DC6 and RC24DCS to be around 0.3-0.4 lb over this gap. We tried using stronger magnets, but then there was too much friction, making it harder to rotate the lock.

As with most magnet applications, the key is to minimize the distance between the magnets so that you can use smaller, less expensive magnets – this is what the second rotating design does.

The second design is similar to the first, but it is put on the side of the door, rather than the top. The offset weight of the “L" shaped lock allows it to fall into the "locked" position when there is no external magnet present.

This design uses a R822CS-N on the inside face of the latch and we use the same DC6 to attract to it and open the door. Close the door, remove the DC6 and the lock falls into the locked position – voilà!

Every application will be different and prototyping is important. You might order a few different shapes and sizes to see what gives you the best feel for your particular lock. Also, our calculator can be helpful to get some force estimates. Some general advice to keep in mind:

Have you made your own hidden magnetic lock? We’d love to see it! Send us an email and we'll update this blog to include pictures of your project!