Can I re-magnetize the magnetic seal on my refrigerator door using powerful neodymium magnets? It might be possible, but you could further demagnetize it. If in doubt, don’t do it.

To ignore this warning and learn more, let’s dive in. If something is wrong with your refrigerator door seal, maybe you can fix it without replacing the entire seal!

My refrigerator seal has a magnet? 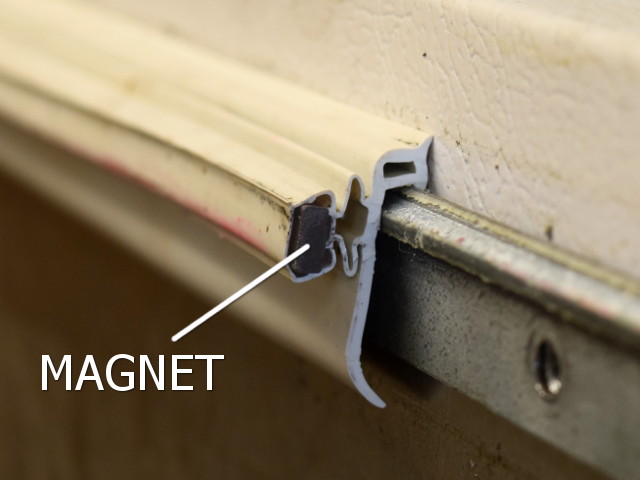 A literal cutaway view of an old refrigerator seal.

Running all around the edge of your refrigerator door is a squishable gasket.  It makes a seal between the door and the main body of the refrigerator. Embedded inside this flexible PVC gasket is a flexible magnet. The magnet attracts to the steel body of the fridge, ensuring a good seal.

The flexible magnet isn’t nearly as strong as the neodymium magnets we usually feature here. The long magnet does cover a large area, though.  Even though the force is weak, it adds up over the length of it. It takes about 5-10 lb of force to yank open a refrigerator door, so it’s holding with some force!

That flexible magnet doesn’t just have a weaker pull force, it’s also a magnet with much lower coercivity. Coercivity is a measure of a magnet’s resistance to getting demagnetized. It’s much easier to demagnetize one of these flexible magnets, at least when compared to a neodymium magnet.

What not to do 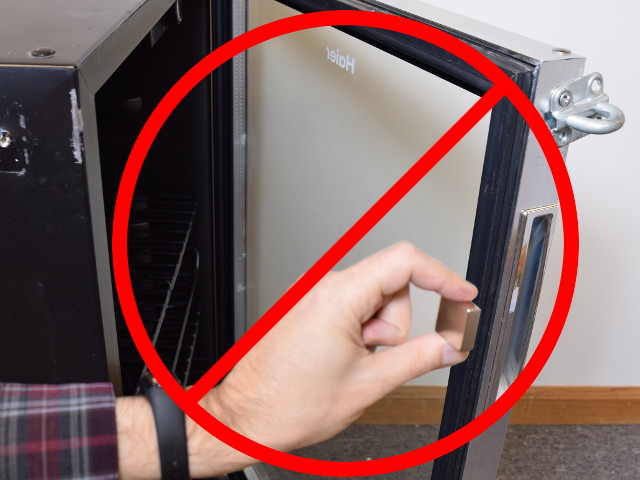 Please do not do this, or you will ruin your seal.

If you take a large neodymium magnet and rub one pole of it up and down the magnetic seal, you will completely demagnetize it. You could render it worthless.  If you've already done this, you might need to buy a completely new seal.

With this risk in mind, we’re going to suggest some non-magnetic solutions to fixing your door seal. These probably cover over 90% of the situations we hear about. Getting a strong neodymium magnet to re-magnetize the seal should not be your first solution.

Most of the time, if something is wrong with your seal, it's probably not the magnet.

Does your seal have a weak spot? 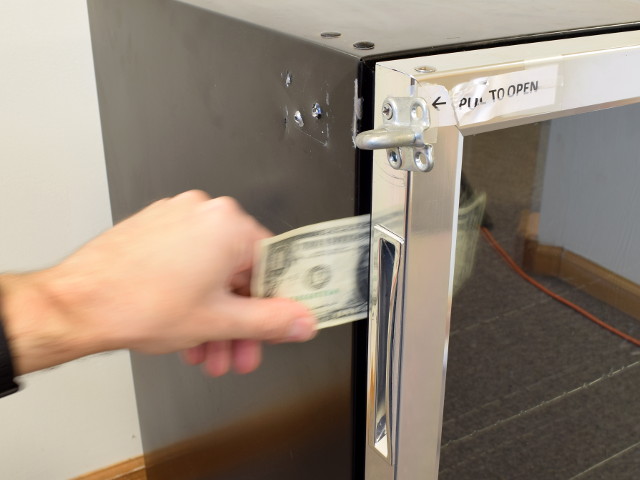 The dollar bill test: Do you feel some resistance?

First, let's do a quick test to verify that the seal actually has a problem.  Take a dollar bill and stick it in between the gasket and the main body of the refrigerator. Open the door, hold the bill in place, and close the door on it.

Now try pulling the bill out with the door closed. You can slide it out, but if the magnetic gasket is applying the right pressure, you should feel some resistance.

Repeat this procedure all around the gasket, on both sides as well as the top and bottom of the door. If there’s an area that isn’t sealing well, you should notice a difference. It only takes a small leak to make a big change in your refrigerator’s efficiency.

Non-magnetic ways to fix it 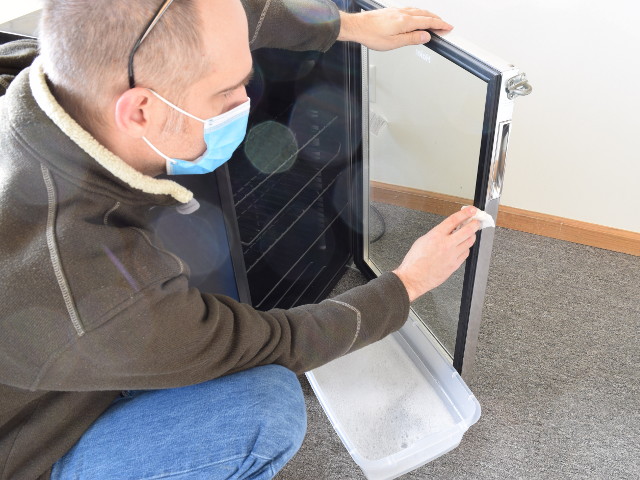 Soap and water, a non-magnetic solution that solves many issues.

If you do find a problem area, there are a few fixes you can do without resorting to magnets. The first and foremost is to clean the seal.  With a rag soaked in warm, soapy water, rub the whole gasket to remove built up oils and contamination. Do the same to the surface of the refrigerator main body.

The gasket’s flexible PVC material can age. It gets less flexible and more brittle over time. Warming the gasket sometimes helps it conform to the shape of the fridge.  Some sites recommend blowing on it with a hair dryer to warm it up, without getting too close.

Though we haven’t tried it ourselves, we’ve read suggestions about removing the whole seal and immersing it in a warm bath of water to make it more pliable. If you do this, avoid bending the gasket too sharply, which could break the magnet or the gasket material.

Another trick we’ve read about is petroleum jelly. After a thorough cleaning, you can run a very thin layer of Vaseline or petroleum jelly to the surface of the gasket, especially where it touches the fridge. This can help fill in any tiny gaps, improving the seal.

Please take all this non-magnet advice seriously.  In most cases, a problematic seal isn't caused by a demagnetized magnet.  These are the solutions most likely to work if you have a problematic seal.   If they don’t, you might need to purchase a replacement seal.

If you don’t mind risking the seal you have, read on to learn how the magnets work and how you might partially remagnetize the fridge seal magnet. 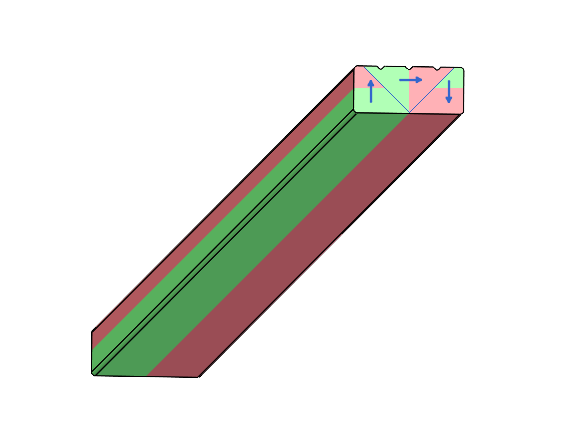 The flexible magnet inside the seal is magnetized like a Halbach array.

Since that flexible magnet is so weak and easily demagnetized, they’re magnetized in a smart way to improve strength and resistance to getting demagnetized. Rather than a single north and south pole pair, like most of our magnets, flexible fridge seals are usually magnetized with multiple magnetic pole pairs.

Most refrigerator seal flexible magnets are magnetized with the face showing two areas of different magnetization direction, 180 degrees opposite from one another.  We’ve also seen a few fridge seals that use three areas.

This ingenious setup enables this weak magnet to get a much stronger hold on the nearby steel surface. It also shapes the magnetic circuit in a way that helps reduce the chances of demagnetization, like a keeper on an old horseshoe magnet. 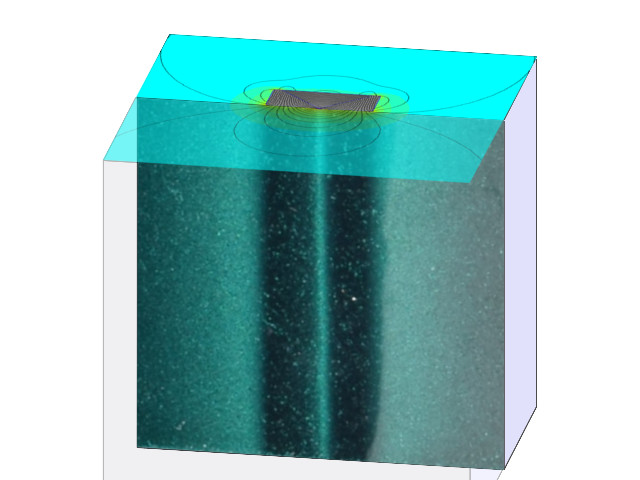 The green magnetic viewing film shows a light-colored line where the field direction is parallel to the film.

A piece of green MV43 magnetic viewing film helps illustrate the magnetization. This film shows a light colored line anywhere the field direction is parallel to the film (in the plane of the film). Placing this sheet on top of your fridge gasket should reveal either the single or double line pattern. 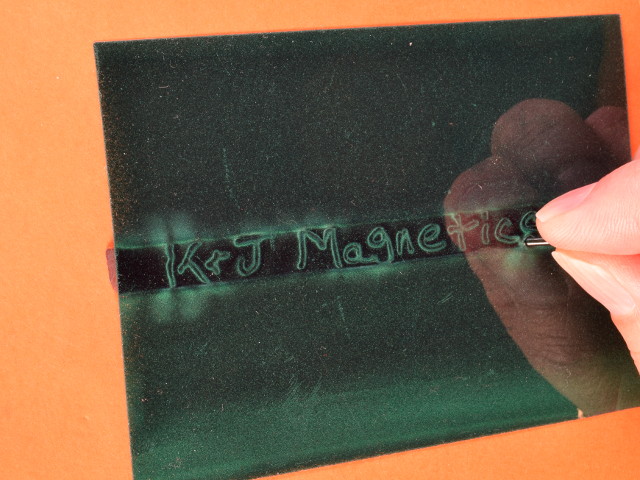 A strong neodymium magnet (like this D1C cylinder) can re-magnetize the weaker, flexible fridge magnet in new directions.

We experimented and tested a number of ways to re-magnetize these flexible fridge magnets. Our goal was to prove out a few suggestions about how to re-magnetize them by just rubbing some combination of neodymium magnets against them, without having to remove the seal.

Unfortunately, our results were not as good or clear cut as we hoped.

If you’re a flexible magnet expert with a better idea about how to do this, please email us your solution! We’ll update this article with anything we learn.

We started with a small strip of this magnet material we scavenged from an old refrigerator door. Measuring pull force to a 4” wide steel surface showed 0.62 lb. Assuming this old magnet is still good, that’s our baseline strength. Can we match it by magnetizing it ourselves?

One magnetization direction, through the thinnest dimension 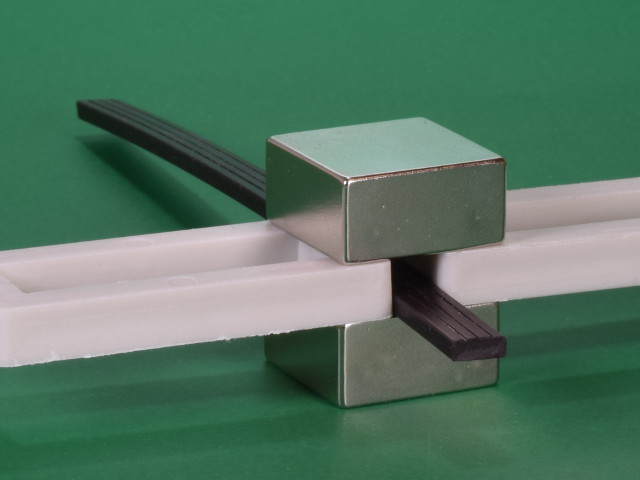 The strong, uniform magnetic field in a gap between two neodymium BX0X08 magnets changines the magnetization direction of the flexible magnet.

After passing through this gap, pull force testing of the flexible magnet measured 0.1 lb, just 16% of the original strength.

Changing the magnetization scheme to present a single pole to the face of the fridge just doesn't work as well.

One magnetization direction, through the wider dimension 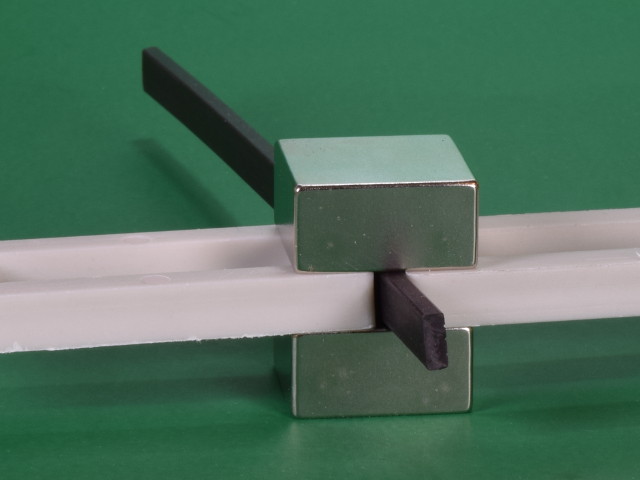 Magnetizing it in a single direction, across the width.

Pull force testing of the flexible magnet was better, but still only 0.16 lb.  That's about 26% of the original strength. 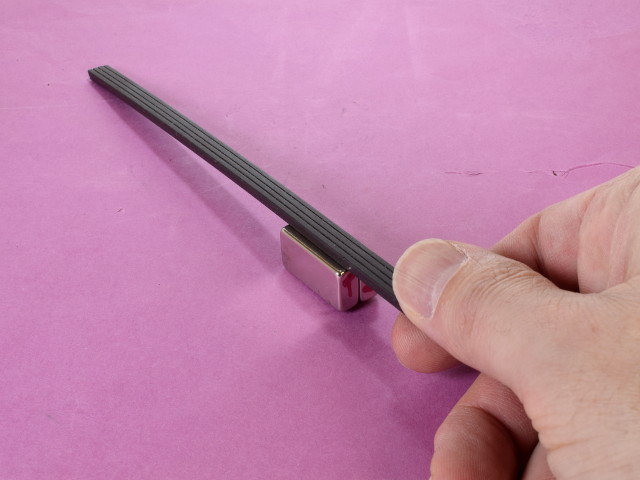 Two BX048 magnets arranged side-by-side magnetizes the fridge seal in our closest approximation of the original. 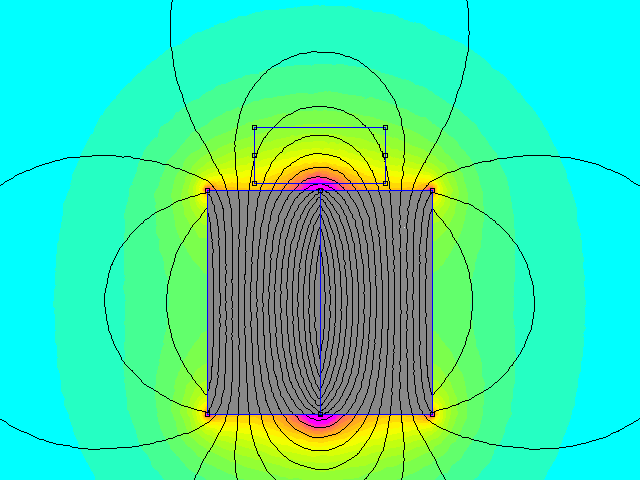 The BX048 magnets are 1" x 1/4" x 1/2" thick blocks.  Unlike most of the neodymium block magnets we offer, these unique magnets aren’t magnetized through their thinnest dimension. The north and south poles are on the 1” x 1/4” faces.

Placing two of these magnets side by side, the top surface has its north and south poles showing. By rubbing this against the flexible refrigerator seal magnet, centered on the fridge magnet, we can magnetize it more like the original scheme.

We initially assumed this scheme would fully re-magnetize the flexible magnet. We were surprised to see this result fall a little short. It’s not the clear, slam-dunk solution we were hoping for.

If your fridge seal is completely demagnetized, rubbing a pair of BX048 block magnets arranged this way along the problem area might offer some real improvement. It might not get to the full, original strength, but it could improve matters.

If you find that the seal does have some magnetization, try orienting these magnets to reinforce it, magnetizing the flexible magnet in the same direction.

Go big, attack the problem from both directions 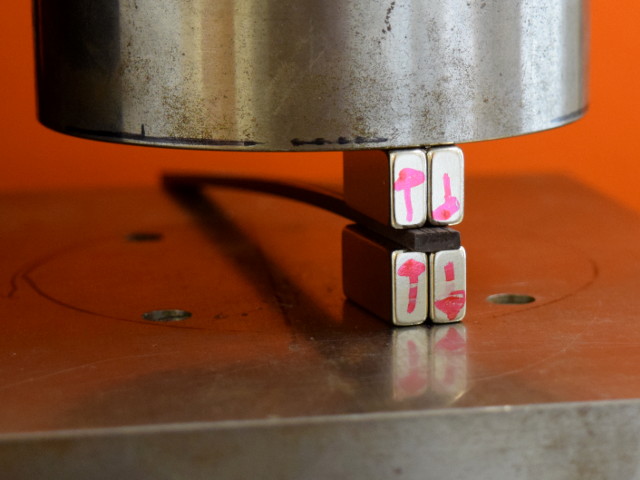 Two BX048 magnets on either side of the flexible magnet. 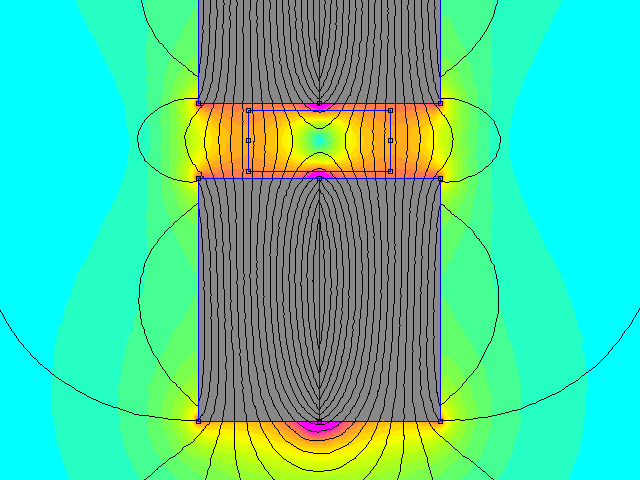 A magnetic field depiction of the sandwiched fridge seal magnet. 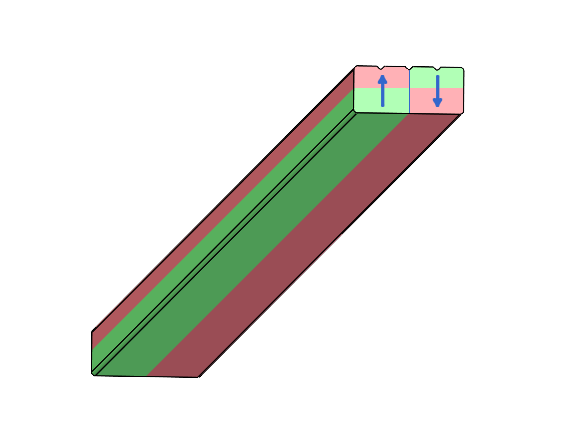 In our last-ditch effort to re-magnetize the flexible magnet, we set pairs of BX048 magnets on either side of it. This isn’t a feasible solution to re-magnetize the fridge seal while still installed on the door, but we really wanted to see the magnet get back to full strength.

Magnetized this way, we figure it should magnetize more of the flexible magnet, using more field strength in the direction we’re after. 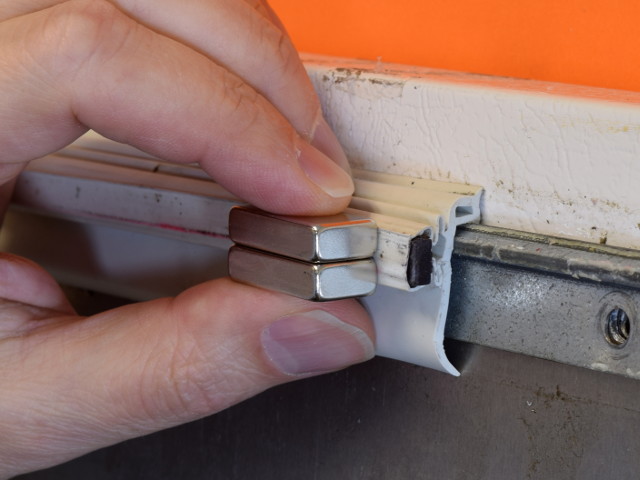 Two BX048 magnets might improve your seal's magnetization without disassembling the seal.

If the magnetic gasket on your refrigerator isn’t sealing properly, it probably isn’t the fault of the magnet. It might need cleaning, or a bit of heat to reshape old, less flexible PVC material.

We’re a bunch of magnet nerds here at K&J Magnetics, so you can be sure that most of us have an excessive amount of strong magnets on our refrigerators at home. Despite that, we’ve never seen a fridge seal get messed up. You’d have to stick a strong neodymium magnet right up against the seal to do that.

If you’re not sure whether your refrigerator’s magnet is still magnetized properly, get some MV43 green viewing film to check for the telltale single or double stripe indication.

If you’re willing to risk it, you might be able to get some strength back from a demagnetized fridge gasket using a pair of BX048 block magnets.

What if I filled the gap between the door and the body of the fridge with a stack of magnets placed outside of the gasket area? If those magnets attract to hold the door shut tightly, would that be enough to squish the gasket? Even if the gasket’s flexible magnet were completely demagnetized, shouldn’t it seal if squeezed tightly shut?

Maybe, but it would not address a deformed or raised area somewhere on the gasket. Also, you’re then putting powerful magnets right next to the magnetic seal. It’s possible that could further demagnetize a seal that’s partially working.

Maybe 3 is better than 2 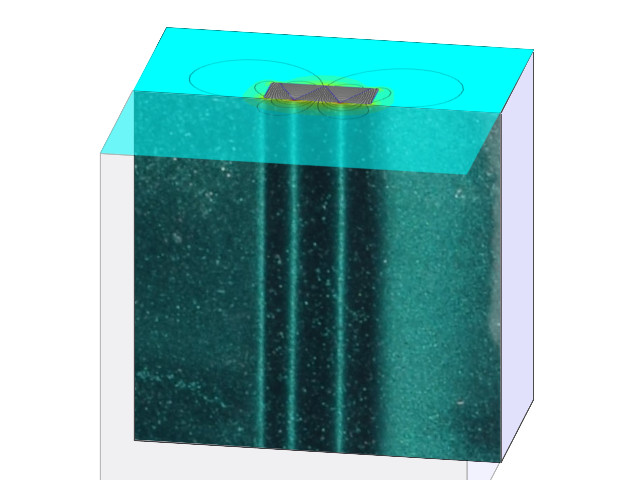 We found a few fridge seals that used 3-pole magnetization of the flexible magnet, rather than two.  If all else fails, you might try this with three BX028 magnets side by side by side.  This worked, but wasn't quite as strong in our testing.

In the past, refrigerators didn't have magnetic seals.  They used a handle with a mechanical latch. This was cheaper, easier to manufacture, and sealed quite well. Why did we ever change from the pull-handle latch?

There have been numerous cases of kids playing in a discarded refrigerator and getting locked in. Unable to open the sealed box, this caused a number of deaths.  Safety laws enacted in the late 1950s forced manufacturers to respond. Magnetic seals were an innovative solution that solved the problem well, without incurring higher costs or complexity.