How is a Gauss Gun made?  What is needed to make one of your own?  How and why does it work?  In this article, we study Gauss Guns and analyze some details of their construction.

What is a Gauss Gun?

The core of a gauss gun consists of a single neodymium magnet with several steel balls stuck to it.  When another, single steel ball rolls towards the magnet, the attractive force from the magnet accelerates this ball.  The closer the ball gets to the magnet, the stronger this acceleration force becomes.  It impacts the magnet at a higher speed than it was traveling before.

When the impact occurs, the energy is transferred to the ball on the opposite end, giving it a speed that is almost the same velocity as the first magnet, right at the moment before impact.

What is happening here? 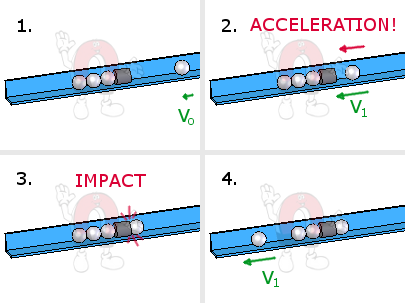 Let's break down the action step by step.

First, a single steel ball is rolled towards the magnet at a slow speed, as shown in step 1 at right.

In step 2, the ball is attracted to the magnet more and more as it gets closer to it.  The closer the ball gets, the stronger the attraction force.  All this pull acting on the steel ball accelerates it to higher speeds.  F = ma.

In step 4, the energy from the first magnet is transferred to the ball on the opposite end.  This opposite steel ball then starts moving at about the same speed, minus losses that occurred during the impact.

With a multi-stage Gauss Gun, each stage follows the same steps described above.  The difference is that the ball is rolling at a faster initial speed before approaching the next stage.

An Analogy with Gravity 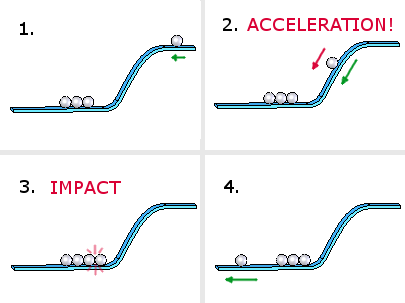 While magnetic forces can sometimes seem mysterious, what's happening here is readily explained by Newton's Laws of Motion.  Consider an analogy to help our understanding of this mechanism.  The setup uses only steel balls and no magnets.  Gravity is the force that accelerates the balls.

Again, we can break the process down into the same four steps:

What size should I use?  Are larger diameter balls better?

There's more energy involved, but it also takes more energy to accelerate the bigger mass.  At right is a list of the sizes and exit speeds we measured in the slow motion video segments at the beginning of this article.

The size you select will often depend on what you are using it for.  If it’s part of a school science project and you want to keep the costs low, use a smaller size.  For demonstrations in front of an audience, a larger size is easier to see.

While our 1/2” diameter steel balls are probably the most commonly chosen size for Gauss Guns, choose the size that makes the most sense for you.  Use the table below to select the magnets and steel balls for your Gauss Gun.

How many stages should I use?

In theory, the more stages we add the faster the ball will go.  In practice, each stage adds less speed to the moving ball.  Energy is lost due to impacts, rolling friction, air resistance and a small amount of magnetic force on the ball leaving the stage.

How many balls should be placed after the magnet?

It depends.  With too few steel balls, the ball that is to be launched is still held in place by the magnetic force from the magnet.  With too many balls, several balls may launch away from the magnet, reducing the speed of the end ball.

What else can be done to improve performance?

While there is a limit, adding stages will increase the exit speed of the last ball.

In the slow motion videos above, the magnet and remaining balls are sometimes seen to slide to the right.  This represents wasted energy that could have been used to propel the ball even faster.  Consider securing/clamping/gluing the magnets in place to prevent this motion.

Consider larger magnets.  While all these examples used cylinder magnets, one could also use block magnets, which have a bit more magnet material.  For example, a B888 block can be used with 1/2” diameter NSB8 balls, rather than a D88 cylinder.

If you're trying to make one of these gauss guns, use care and be safe.  Extremely hard impacts can chip or crack a brittle neodymium magnet, so be sure to wear eye protection.