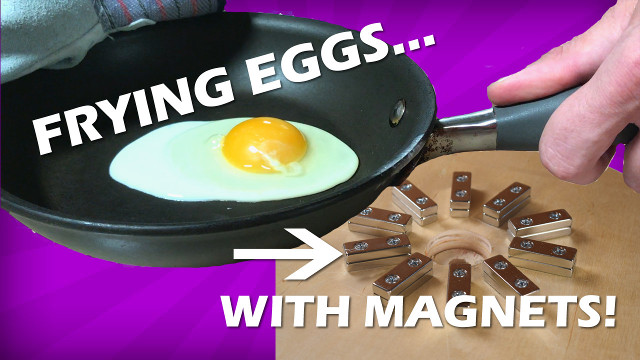 Can spinning magnets fry an egg?  You bet they can!  Let’s see how a simple array of magnets can generate eddy currents in a conductive frying pan, heating it up enough to cook our egg.

The moving magnet creates circles of current in the pipe, turning it into a kind of tiny electromagnet.  That electromagnet acts in the opposite direction of the falling magnet, resisting its movement.  The magnet falls very slowly in a way that's mesmerizing to watch.  You can find many great demonstrations of this on YouTube – it’s such a fun experiment.

Turn up the heat

How does this science experiment get us closer to frying an egg?  Well, ultimately the eddy currents get transformed into heat, warming up the conductive pipe.

The strength of the currents depends directly on how much and how fast the magnetic field is changing.  If we somehow pushed that magnet through the pipe at 100mph, the resisting force would be a lot stronger.  We’d convert a lot of that energy into heating up the pipe. 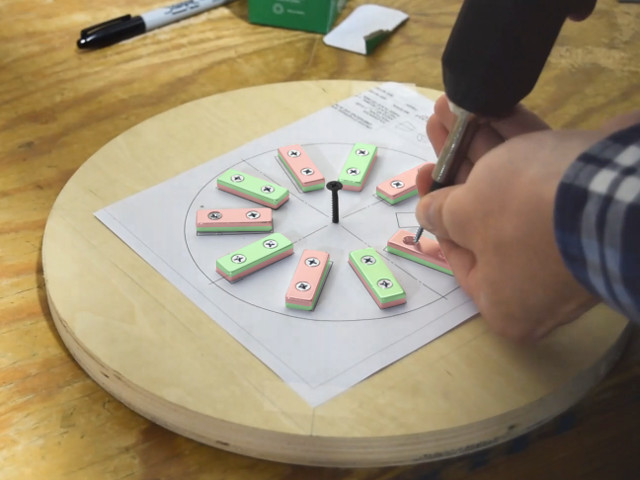 The poles facing up alternate in this array of ten BX884DCS magnets.

To fry an egg, we need to induce currents in a frying pan instead of a pipe.  We created an array of magnets that can spin very quickly, sitting just beneath the pan.  A conductive (aluminum) pan above these spinning magnets should “see” a changing magnetic field that becomes heat.

Note: Inductive stove tops are a real thing.  You can buy one for your kitchen right now.  They are more expensive than radiant stoves, but can be more efficient.  Those stoves don’t use a rapidly spinning array of magnets like we’re trying here.  They use coils of wire and run electricity through it as an electromagnet.  They also don't work well at all on aluminum or copper pans, sadly.

Does it actually work?

This video shows our trials and errors getting this thing running.  Check it out!

Frying an egg is fun, but there are some more technical, underlying things going on here.  How much energy are we putting into the pan?  How does it compare with a traditional radiant stove?

On any stove, we add heat to the pan to raise its temperature.  We expect the temperature to rise quickly as heat is added.  As it gets hotter, the temperature should level off at some point.  This happens because heat escapes the pan through conduction, convection and radiation. 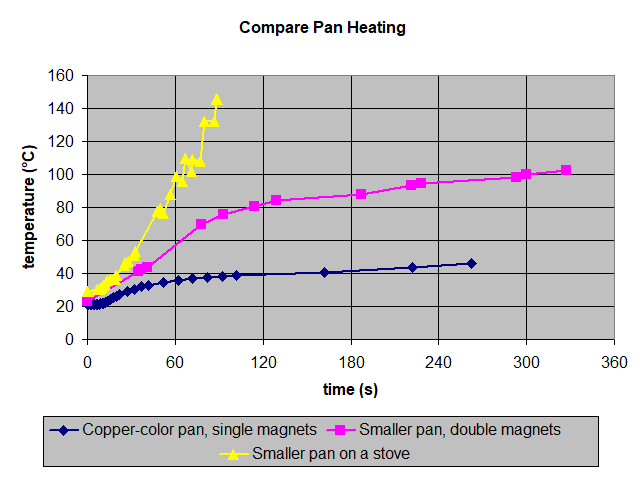 The second attempt used stacks of two magnets, which increased the field strength at the pan.  We also used a smaller, thicker pan.  The pan temperature rose much higher, though it also leveled off.  We exceeded 100°C (212°F), but probably wouldn’t get much higher than 120°C (248°F) if we let it run longer.

Most of us are more familiar with how a pan heats on a gas or radiant electric stove, even if we haven’t measured temperature profiles.  For a reality check, let's compare these inductve results with something we're used to.  The heating element on an electric stove gets much hotter than the temperatures we’ve been experiencing with our DIY inductive stovetop.  The ultimate, leveled-off temperature is also much hotter.

The yellow line on the graph shows pan temperature rising much more dramatically on the author's stove. We halted the experiment before exceeding the IR thermometer’s limit, or sensible limits for heating Teflon, about 260°C (~500°F).  It is clear that the regular stovetop is pushing a lot more heat into the pan a lot faster.

Obviously, we’re not likely to announce any entries into the inductive stove-top market.  Still, this was an interesting look at just how much heat can be generated with a simple eddy current system.  Eddy current brakes that halt spinning parts of machinery or stop roller coasters in their tracks must have a plan to dissipate all the heat that builds up.

How did we end up doing such an oddball experiment?  It all started when we watched a recent Cody'sLab video on YouTube.  He used a neodymium magnet to sort out old copper pennies from newer pennies that are only copper plated.  It was so cool, we just had to try it ourselves!

It wasn't too hard to replicate his results.  The two different penny materials responded quite differently!  Of course we had to one-up the game and use a Halbach array of magnets, instead of a single magnet.  It probably wasn't necessary, but is a fun way to get a strong field there.

That led to us wonder: Could we heat up a penny if we just moved it faster, relative to the magnets?  We did a quick test with some magnets on a disc attached to a drill press, which quickly heated up old pennies quite nicely.  A fun experiment, for sure, but it didn't seem worthwhile for a whole blog article. What if we could heat up something more interesting, like frying an egg?