I’m trying to shield a magnetic field.  Do I need to use MuMETAL?  How much is enough?  What’s the best material to use?

MuMETAL®: What is it? 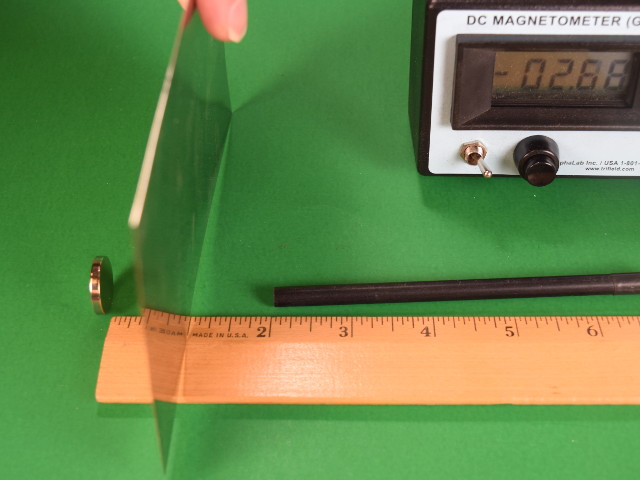 MuMETAL is an alloy of nickel and iron used for magnetic shielding.  You can find it inside many electronic devices, from hard drives to CRT televisions.

MuMETAL is made of mostly nickel.  It contains of about 75-80% nickel, with iron and other elements making up the balance.  In comparison, regular steel is an alloy made of mostly iron.  Steel is often more than 99% iron.

Should you use MuMETAL to shield a magnet?  Or is plain old steel better?

For example, let’s say you place a sheet of metal right next to a neodymium magnet.  You want to see a weaker magnetic field on the far side of the metal.  In this particular case, steel is usually the better choice.  MuMETAL doesn’t block as much field strength as regular steel.

What gives? I thought MuMETAL was the best shielding material!

As with many magnetic questions, the answer depends on the setup.  In some cases steel performs better, while in others MuMETAL does.  It’s complicated.  We talked about this topic in a general way in our very first blog article, Shielding Materials.

Let’s see if we can boil it down by comparing two very specific materials, steel vs. MuMETAL.

Not one, but two properties apply! 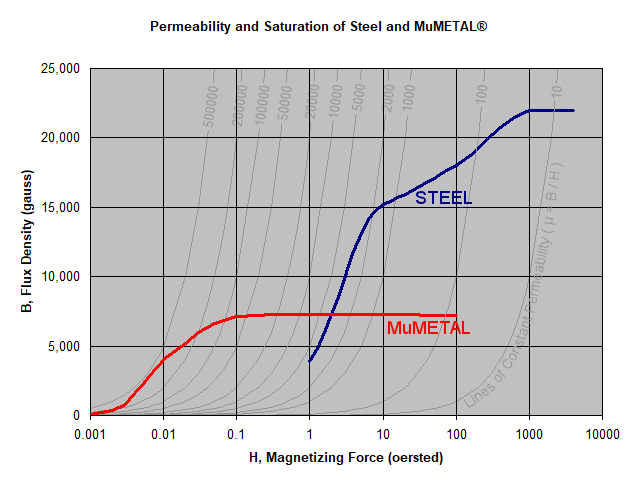 MuMETAL has a much higher permeability at lower magnetizing force, but saturates at a much lower flux density compared to steel.

There are actually two material properties that help us understand the performance of these shielding materials, Mu-Metal vs. steel.  The first is Permeability.  It’s a measure of how much magnetic flux the material can absorb.  In other words, how much does a piece of this material become magnetized when it's placed in the presense of a magnetic field (a.k.a. when you stick a magnet on it).

The second property to consider is the saturation point.  This is the point at which the material can’t contain any more magnetic flux.  It’s like filling a bucket; if you go over the saturation number, the field leaks out the side.

With a thin shield 0.4" away from a DC2 disc magnet, steel reduces the field to a much lower number than MuMETAL.
Winner: Steel.

With a thin shield 0.8" away from a DC2 disc magnet, MuMETAL reduces the field to half as much as steel.
Winner: MuMETAL.

If you’re trying to shield a really powerful magnetic field right near a neodymium magnet, steel is often better than MuMetal.  If the field is weaker, you might block more with MuMetal.

If you’re trying to redirect the magnetic field near a strong magnet, like the steel cup does in our Mounting Magnets, steel is best.  MuMETAL would saturate and performance wouldn’t be nearly as good.

If you’re building a metal box over some sensitive electronic device or component, MuMETAL might block more of the field.  This is especially true if the field isn’t too strong.

Trying to block the earth’s ~0.5 gauss magnetic field?  Some specialty alloys can perform better than steel.  Of course, steel is pretty good too; you might just need a thicker sheet to get equivalent performance.

Some interesting setups use multiple layers of shielding material, providing even more attenuation.  This kind of assembly can use both materials, with an outer steel layer and MuMETAL inner layer(s).

We mentioned in the beginning that we’re biased towards magnets and strong magnetic fields.  Naturally, we haven’t mentioned a thing about changing magnetic fields, like you might find near AC (alternating current).  The field near a permanent magnet doesn’t alternate, so we don’t think about this too much.

There are a number of technical, electrical engineering reasons why some of these specialized shielding alloys work better near alternating fields.  Think about the electronics inside a stereo that has to keep the 60 Hz hum from being audible over your speakers.  Or consider all that goes on inside a CRT display, where magnetic fields steer an electron beam to draw on the screen.  There are a lot of applications (over our heads) where these materials solve problems quite nicely.

Can magnetic fields be blocked with a material that isn't attractive to magnets?

No.  The better a material is at re-directing magnetic fields, the more they'll be attracted to a magnet.  You can't have both.

Remember, you really can't block a magnetic line of flux from following its path from the north to the south pole of a magnet.  It won't stop in mid-air.  A good shield redirects it, making it go where you want.

This is the very definition of permeability.  If you're looking for a good shield, you want its relative permeability to be a high number.  A high permeability means that magnetic field lines "like" to "flow" in that material more than others -- magnets stick to it!

Additional Thoughts: What’s in a Name?

There are a number of other high-nickel content alloys that are great for magnetic shielding that are not MuMETAL.  If you look closely, you’ll notice that other companies selling such products will not call it MuMetal, because that would be a trademark violation.  They’ll call it something else, like high-nickel magnetic alloy.

The idea of using this kind of metal was known long before the name MuMETAL was trademarked.  The confusing thing is that some people refer to the whole family of high-nickel-content alloys with the same “mu-metal” name.  It has become an unofficial generic name, kind of like a Band-Aid or a Kleenex, probably because of MuMETAL’s popularity over the years.  In reality, there are a multiple varieties of these high-nickel alloys that perform better or worse in different circumstances.

Do you use magnetic shielding in your projects?  Let us know how you do it!