Is the repelling force between two magnets the same as the attracting force?

We always thought it was the same.  While putting together this article, we began to realize that might not be 100% true.  It seems to be almost the same.  Simulations revealed slightly lower forces for two magnets repelling when compared with their attraction force at the same distance.

If the repelling force is a bit less than we expected, let’s explore why! 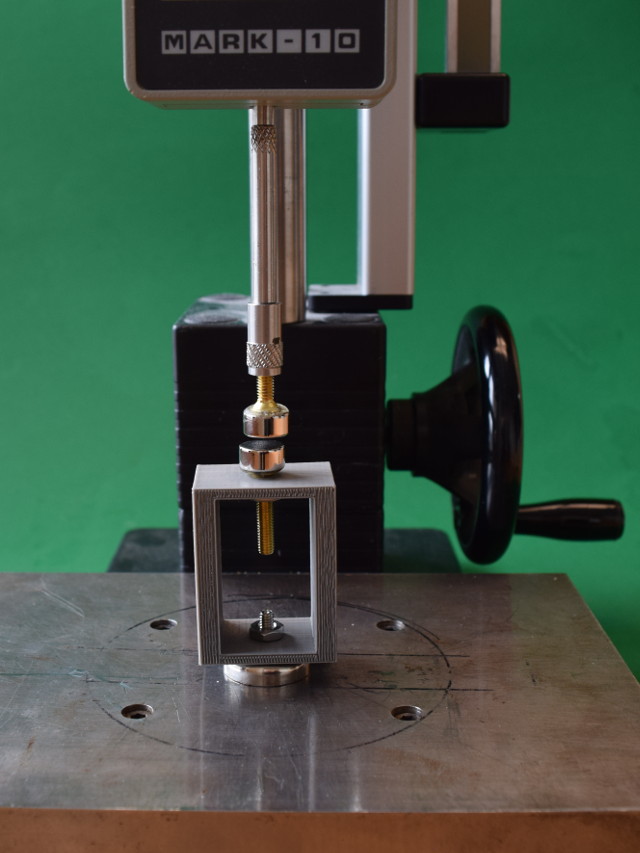 When we originally created our Magnet Calculator many years ago, all the theories and equations we found fell short.  Calculations didn’t quite match what we measured with actual magnets.  To ensure the calculator matched what we measured, we built it based on a huge number of pull force measurements we meticulously made ourselves.

We still didn’t fully understand the theory, or why some equations only worked well in some situations, but at least we had an accurate calculator whose results we could rely on.

We measured magnets both attracting and repelling one another.  The forces were very similar, though we did find that the repelling forces were a little weaker.  We also found that the difference between these two numbers got larger with more powerful magnets, and went to almost nothing with tiny magnets.

Why were the repelling forces slightly less than the attracting forces?

We blamed errors and imperfections in our measurement setup.  Unlike attracting magnets that tend to center on one another, repelling magnets are not stable.  They are actively trying to push one another off axis.  There is also a torque trying to rotate a magnet around to attract.  Since that measurement data includes these imperfections, we chalked up the difference to those errors.

Taking a fresh look at the subject today, we started with a simple premise: We’ll first present some computer simulations showing how the forces are theoretically equal, and then demonstrate why we don’t usually reach that ideal in practice.

The problem is, our careful simulations revealed that the attraction and repulsion forces are not perfectly equal.  After running dozens of simulations of disc, cylinder, and sphere shaped magnets, we weren’t getting equal forces.  The simulations were showing repelling forces about 5-10% weaker than attracting forces.

Finite element analysis doesn’t suffer from any of our experimental woes, such as magnet variation, magnets positioned off-axis, and/or magnet faces not perfectly perpendicular to one another.  It assumes the magnets are held perfectly aligned.

Simulating D82 disc magnets attracting and repelling one another

To answer our attraction vs. repelling questions, we re-run the same set of simulations, but with one of the magnets turned around.

Contrary to our expectations, our simulation results say those repelling forces are weaker, especially when the distance between the magnets is small.  What we had chalked up to our experimental error might actually be real!

What does this mean for you?

Though these slightly weaker repelling forces are different than what we previously thought, it is a small correction.  We’ve updated our Repelling Magnet Calculator to reflect these discoveries.

In practice, you’re likely to find that repelling forces are even lower than this small correction implies.  All those experimental errors we talked about earlier are still something you will have to contend with.  Repelling magnets will push and torque one another to get misaligned, which means you get less force.

For a sense of expected repulsion forces, check out the graph of measurements we conducted for this story.  The greater the magnet strength, the greater the difference in our measurements.  To be fair to the magnets, the discrepancy is probably more about the lack of rigidity in our test fixture than anything else. 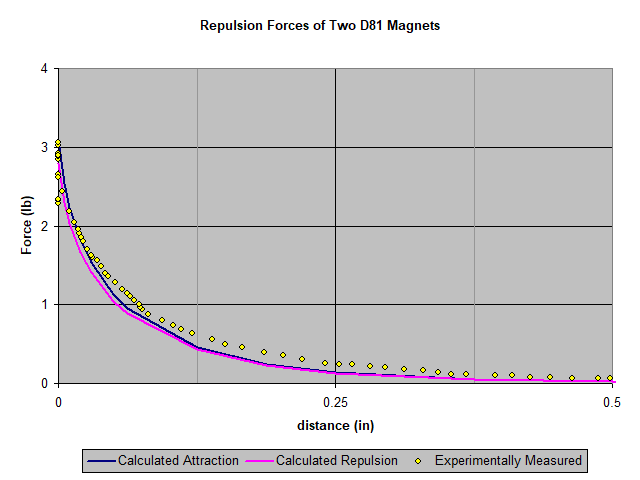 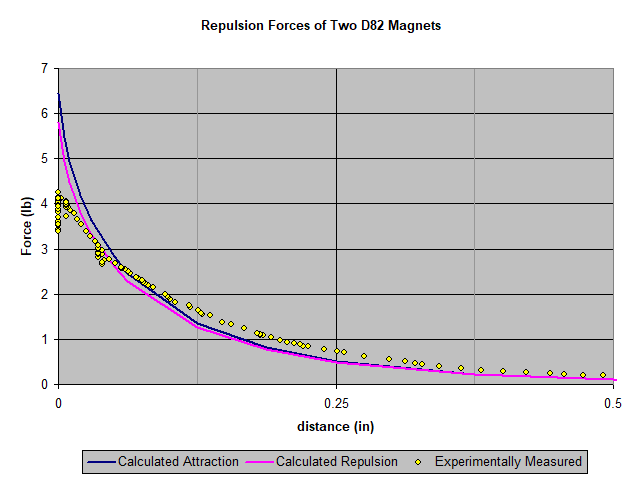 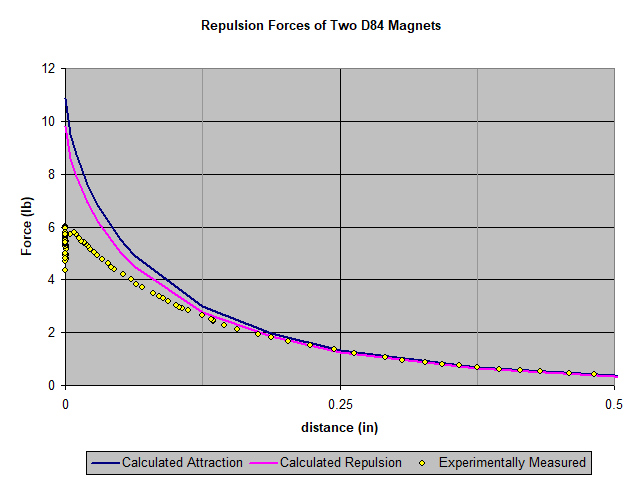