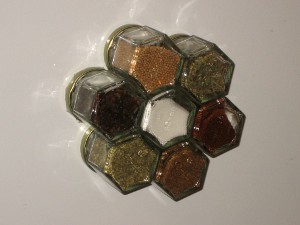 A newly popular way of artfully storing spices uses magnets to hold them to the side of a refrigerator, or to any steel surface.  The use of glass, hexagon-shaped jars is most popular.  We’ve received so many questions about it, it seemed time to try this out ourselves.

Hopefully, our discoveries and answers will help you with your own projects.

Spice Jars that Stick to Metal

The goal is to have a magnet on the lid that will stick to a steel surface. They have to be strong enough to hold up the jar, even when full of spices.  They need to be weak enough so that it’s reasonable to pull them off easily.  How much magnetic strength is needed? 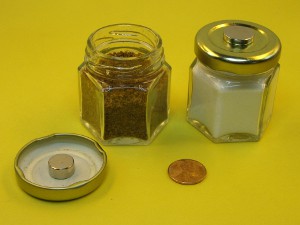 Magnet inside or outside of the jar?

Many of the projects we’ve seen place strong magnets on the inside of the lid.  This gives a nice, finished look to the jar, where the magnet is hidden.

The problem is that if you stick the magnet inside the lid rather than on top, you need a bigger magnet to get enough holding strength to hold up the jar.  Not only is the magnet farther away from the steel surface of the fridge, but the steel lid actually acts as a magnetic shield, blocking some of the magnetic field from reaching the fridge.  A magnet inside the jar will have to be larger than one on top of the lid.  To be thorough, we tried it both ways.

Nickel plated neodymium magnets can corrode over time if exposed to moisture.  If you place the magnet on the inside of a container filled with a hygroscopic (tends to attract and hold water) spice like salt or sugar, you might see rust over time.  This might be one argument for placing the magnets outside of the jar.

Or, consider our quick-and-dirty waterproofing solution: sandwich your magnet between two pieces of packing tape.  The tape, which always seems to stick well to itself, can form a waterproof barrier that’s thin and inexpensive. 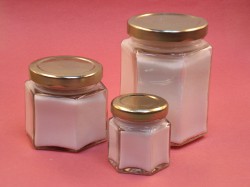 The hexagon-shaped glass jar we are experimenting with weighs about 2.4 oz empty.  They are sold as 1.5 oz jars, which means they hold a volume of about 1.5 oz.

We filled them with water and with sugar, and found the total weight to be about the same, at 3.9 oz.  The tests below were done with a full jar of sugar, which is probably one of heavier spices that might be used.

There are also larger jars available in similar shapes.  We found ours online at Specialty Bottle, but there are a number of places where these are available.

Testing the 1.5oz Jar, Magnet Inside the Lid

Below are test results for various magnets we tried, with the magnet placed on the inside of the cap.  We tested these on a typical, painted steel (not stainless) refrigerator.

We recommend the last three.  The D84 or DA4 discs worked well.

Is there a better way? 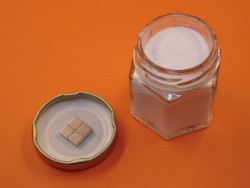 Use four B442 magnets inside the lid

The biggest problem with this setup is that the steel lid blocks a fair portion of the magnetic field.  We wondered, is there a way we can get more magnetic field through the steel without resorting to an even bigger, more expensive magnet?

We did find a way.  It was inspired by our experience making a Magnetic Knife Holder, where a row of magnets were placed side by side.  In that array of magnets, the poles alternated.  If the first magnet has the north pole facing up, the next has the south pole facing up.  We found that the magnetic field was especially strong (concentrated?) at a location right where the two magnets meet.  Can we use something like this?

Next, we tried a 2x2 array of four B442 magnets, which worked even better.  It’s a great amount of pull force that uses less magnet, so it is more cost effective than a similar feeling DA4 or DC4 magnet.  We like this solution best.

We also tried a 2x2 array of larger B642 magnets, which was quite strong.

In each case, the poles facing up alternates, north and south.  See the video at the bottom of this article to see us assembling them.

Are we a bunch of magnetic geniuses to come up with something this simple but effective?  Not really.  Closer examination of some of the photos we've seen shows that many folks are actually using more than one magnet underneath the lid.  Most commonly, we saw two disc magnets arranged side-by-side.  While not as slick as our blocks, two discs can work well.  We tried two D82 magnets arranged side-by-side under the lid, which also performed well.

You might also experiment with other magnets sizes and combinations.  Using at least two magnets in a side-by-side arrangement seems the way to go.

What about a really big jar? 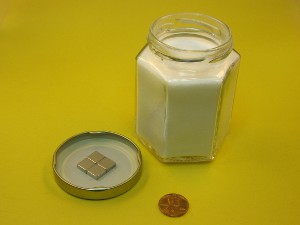 The largest size jar we found in this style holds 9oz., and requires more magnetic strength to hold when full.  We tried a single DC4 magnet, which failed to hold it up.

A pair of DC4 magnets side by side worked well enough.

The best solution was four B882 magnets arranged in a 2x2 square.  It offered a nice, sturdy hold that felt secure.

What about 4oz jars?

While putting together some photos for this article, we noticed that many of our spices at home came in 4oz jars.  What if we use the larger, 4oz hexagon jars?  They’re a nice shape, more squat than tall.

We found that a single DA4 disc magnet was a bit light on strength, but held.  A DC4 was better, but still on the weaker side.

Again resorting to an array of magnets, the four B442 magnets held.  For this larger size, though, the larger B642 magnets had a better, more secure feel.

What if the Magnets are Placed on Top of the Lid? 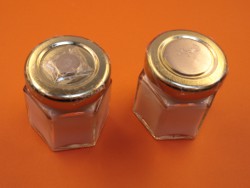 We started with a thin D81 disc magnet.  We taped it on top of the lid for a quick prototype, but you might consider gluing it on for a more permanent solution.  A dab of superglue might work best.  For more advice on adhesives, see our article: How to Glue Neodymium Magnets.

The ½” diameter x 1/16” thick D81 disc held, but because of the small size of the magnet, the result was a bit wobbly.  The whole jar wobbled a little when tapped.

Next we tried a larger but thinner DX001 magnet, 1” diameter x 1/32” thick.  The strength was nice, if a little on the weaker side.  It sits nicely on the lid, though.  Be careful handling magnets this thin, because they are fragile.  A thicker DX01 magnet worked better.

We also found that the layer of packing tape worked better than the same magnet glued to the lid.  The packing tape offers more friction on the smooth surface of the fridge.  Overall, though, the magnets on top of the lid never felt as nice as magnets inside.  We had hoped it would be better, but it was the clear loser in terms of nice presentation.

Will magnets stick to a stainless steel refrigerator?

Maybe.  We brought a magnet into our local home improvement store and tried sticking it to more than a dozen different stainless steel refrigerators they had on display.  The magnet stuck well to about half of them, but not at all to the other half.

Many refrigerators have a stainless steel front, but use regular painted steel on the sides.  Magnets should stick well to the painted sides of a refrigerator.

While trying larger and larger magnets for some of the bigger jar sizes, we ended up using some fairly strong magnets.  Some of them just didn’t seem right to have floating around the kitchen.  For example, we tried a big DX44 disc magnet to hold up the largest jar (it failed), but that’s really a very strong magnet.  I would not want to have it laying around on the kitchen counter near a sharp knife.  It seems a bad idea to have sharp objects unexpectedly moving around on the counter!

Try sticking with thinner, less overly powerful magnets if you can.

If you have trouble separating magnets, be sure to check out our article: Separating Strong Magnets.

Be careful not to allow the magnets to slam into one another.  Neodymium magnets are made of a hard, brittle material that can chip or crack with sharp impacts.

We’ve answered a number of emails about this application recently.  We’re experienced in handling these magnets, and we like to think that our answers were helpful.  Still, like all things, there’s always something to learn by trying it out for yourself.  We certainly learned some new things from experimenting with a few jars and a few different magnet sizes.

Feel free to ask us for advice about your magnet application, but remember: a bit of prototyping and trying it out yourself with a few sizes might be the path to the best solution.  We don’t have minimum order requirements, so you can order just a few magnets in several sizes that you want to try.

Video Coverage of some of our testing