How Hot is Too Hot?

What is the maximum allowable temperature of a neodymium magnet?  What happens if a magnet goes above this temperature?  How do I read a Demagnetization Curve?  Temperature issues and neodymium magnets can be a complex subject.  In this article, we'll try and simplify some of these concepts, and answer a few common questions. 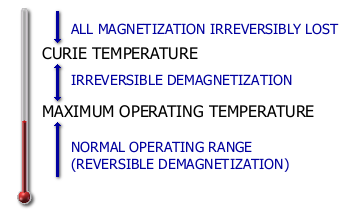 On our Specs page, two key temperatures are listed: the Maximum Operating Temperature, and the Curie Temperature.

Curie Temperature is the temperature at which all magnetization of the magnet is lost.

Maximum Operating Temperature (abbreviated to MaxOpTemp hereafter) is a general number given for each different grade of magnet material.  While not exact, it's a good guideline which applies to many situations.  In between the MaxOpTemp and the Curie Temperature, some percentage of the magnetization is irreversibly lost.

For many situations, this is enough information to work with.  If your eyes glaze over reading some of the technical information below, don't worry.  You can stop right here and be OK for many applications.

Magnetic Strength: Throughout this article, magnetic strength is the key measure.  The product of B times H is often used to described the strength of neodymium magnets.  For example, grade N42 magnets have a maximum BH (called BHmax) of 42MGOe.  This number directly relates to Pull Force Case 1, the attractive force from a single magnet stuck to a large steel plate.  You could also express this as magnetic field, measured in Gauss, at some specific location.  We specify Surface Field in Gauss, measured at the surface of the magnet.  Magnetic Strength is not power, or work, and cannot be expressed in terms of power.

Reversible losses: Up to the MaxOpTemp, you will see some loss of magnetic strength at those elevated temperatures.  When you bring the magnet back down to room temperature, it returns to the original strength.  These losses are small, typically within 5 to 10 percent.

Irreversible losses: Above the MaxOpTemp, some magnetization is lost.  When you bring the magnet back down to room temperature, it will be weaker than it was before the heating process.  A magnet that has had irreversible losses could theoretically be re-magnetized to the original strength, or very close to it.  (K&J Magnetics does not offer re-magnetization services for demagnetized magnets.)

Permanent losses: Above temperatures where the magnet material was originally sintered, structural changes will occur to permanently demagnetize a magnet.  No amount of externally applied magnetic field will bring the magnet's strength back.  For neodymium magnets, this temperature is very high, typically above 900°C to 1000°C.

How much strength will I lose at a given temperature? 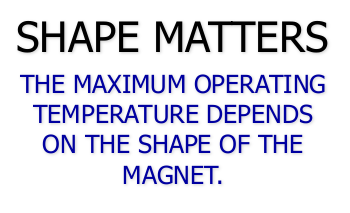 We have to dig a little deeper to answer this level of magnet-geek question.  Let's start by getting a better estimate for MaxOpTemp.  The MaxOpTemp of a given magnet will depend largely on how it is used, "in circuit."  For a magnet in free space, this means it depends on the shape of the magnet.

Yes, that's right, MaxOpTemp depends on the shape of the magnet.  That's a hard concept to swallow, especially when we're used to thinking of operating temperatures as a material property.  Water boils at 100°C whether it's in a tall glass or a wide bowl.  Magnets, however, are not that simple.

You can find graphs of BH Curves for most of our common magnet grades here.  Let's define a few of the interesting features of these curves shown in Figure 1. 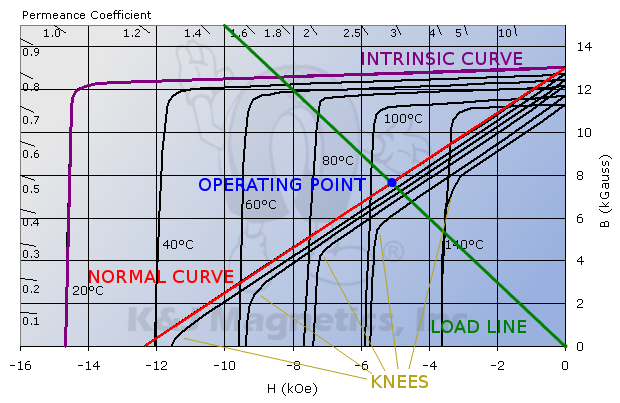 Normal Curve: This curve describes the magnet's performance.  Use the curve for the desired operating temperature.  It's the curve most referred to for design purposes.  The linear portion of this curve has a slope that's sometimes called the Recoil Permeability.  For neodymium magnets, this slope is usually 1.05.

The Knee: The part of the Normal Curve where it bends down, becoming a vertical line.

Intrinsic Curve: The intrinsic curve can be derived from the normal curve, and vice versa.  Don't worry about this curve for now.

Operating point: The intersection of the Load Line and the Normal Curve describes the single operating point of a magnet. 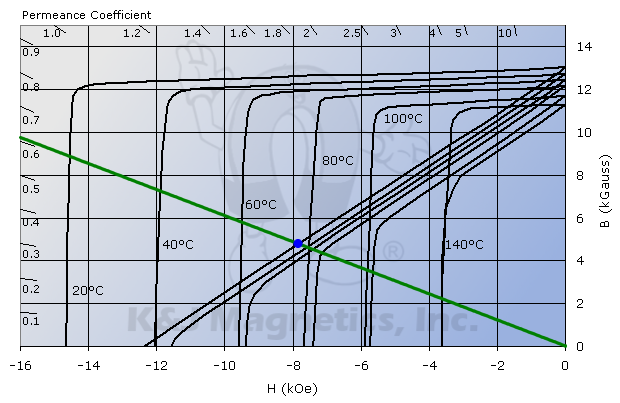 Above 80°C, the magnet begins to irreversibly demagnetize.  Let's consider a magnet that's gone up to 100°C -- dropped in boiling water.  The operating point shown as a blue dot below is at the intersection of the green load line, and the 100°C normal curve.  It is below the knee of the normal curve.  The operating point has dropped down by a distance shown as "B" in the Figure 3 below.

When you cool this magnet back to room temperature, it won't climb back up the knee.  It will drop by an amount shown graphically in purple, as "A".  The red dot represents the new operating point once the magnet cools back to 20°C.  The new operating point is dropped from the 20°C normal curve by the amount lost when the magnet went up to 100°C.; 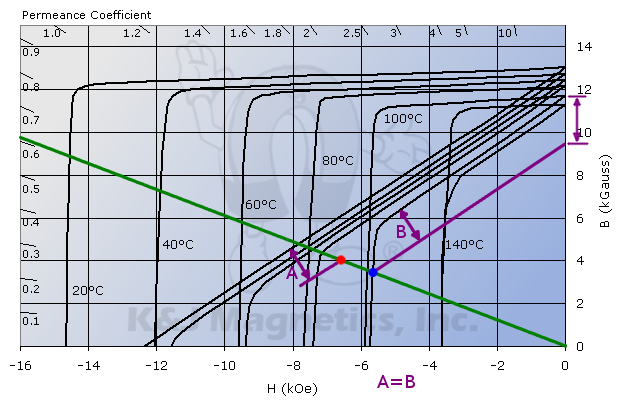 What does this new operating point mean?  How much pull strength will be lost?  Consider that pull strength is closely related to the product of B times H.  Use the absolute value, and ignore the negative values of H.  Graphically estimating B * H from the blue dot in Figure 2, it is approximately 38.6 MGOe.  Doing the same for the red dot in Figure 3, I find about 26.3 MGOe.  So, the strength will have dropped to roughly 26.3 / 38.6 or to about 60% of the original strength.

Let's consider an example with a higher value for the Permeance Coefficient.  Any cylinder whose diameter is equal to it's height, like a 1/4" D44, will have a Pc = 3.46.  Again, you can find this value using our Magnet Calculator. 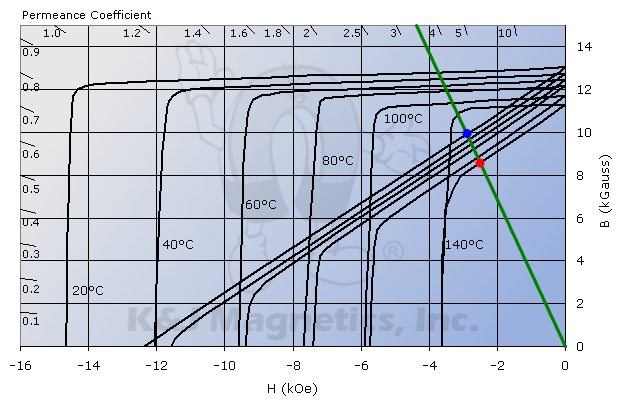 For our final example, let's consider a very thin magnet.  A D61 is a 3/8" diameter x 1/16" tall magnet.  This size is also available in the higher temperature grade N42SH, as a D61SH.  The Calculator indicates that the Pc value for this magnet is 0.38 in free space.  Again, the load line is shown below in green.

The operating point at 60°C is shown in blue.  At this temperature, we're still on the linear portion of the normal curve, so no loss of strength is expected.  At 80°C, the operating point is shown in red.  This is below the knee of the curve, so some amount of irreversible loss of strength is expected.  This result illustrates a handy rule of thumb: The MaxOpTemp may be lower for very thin magnets. 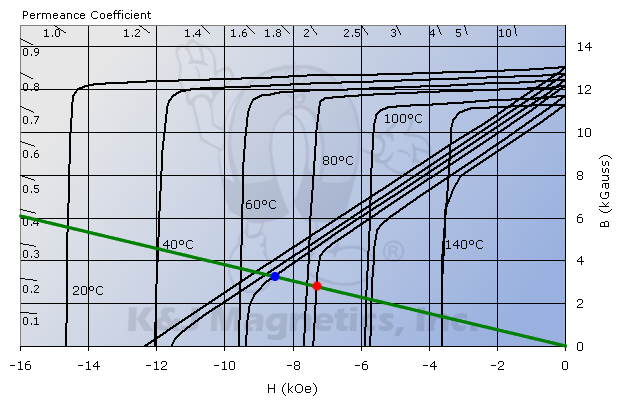 If you need better temperature performance in this shape, consider the D61SH.  On our Specs page, N42SH magnets are listed as having a MaxOpTemp of  302°F (150°C).  Checking the N42SH BH Curves below, we find that the magnet performs without any losses at 80°C or even 110°C.  At 140°C, at the operating point shown at the red dot, we just start to see the first loss of strength.  The D61SH is clearly a better performer at high temperatures than the D61. 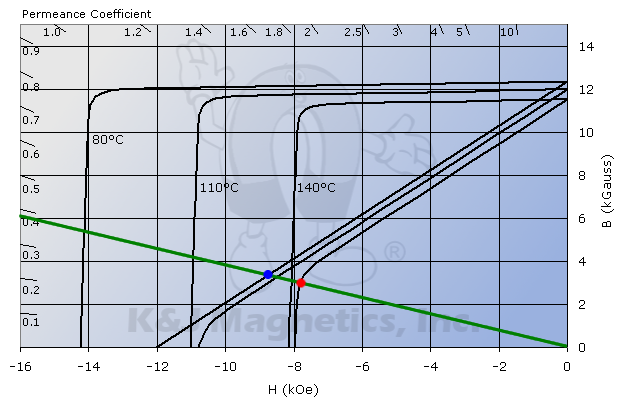 All these examples looked at disc/cylinder magnets.  Everything above is also true for other shapes.  The Magnet Calculator provides Pc values for Blocks and Rings too.

In all these examples, it was assumed that the Permeance Coefficient for a single magnet in free space was applicable.  In your application, this may not be true.  If it is stuck to another magnet or steel plate, it can be substantially more.  It does depend on your specific application.  All this theory is a great guideline, but be sure to test in your own situation.

How cold can neodymium magnets get?  Generally, the colder they get, the stronger they are.  We have yet to find the low temperature that hurts them.  Temperatures as low as -40°C to -60°C don't pose a problem.

What about temperature cycling?  This is a popular question.  As long as you're staying below the Maximum Operating Temperature, it doesn't matter how many times you cycle the magnet's temp.  No irreversible losses occur until you get above the MaxOpTemp.  Even then, if you lose some strength because the magnet strayed above that temperature, you wouldn't incur any successive losses by repeatedly going up to that same temperature.

What about N52?  If you compare the N52 curves to the more common N42, you'll see that there are trade-offs when you choose the most powerful magnet grade available.  In some cases, especially with thinner magnets, N52 magnets can have lower MaxOpTemps than N42.  Be sure to consider this in your selection process. 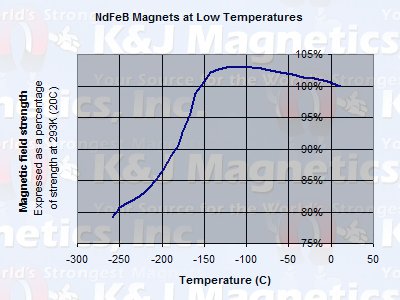 The graph at right shows measurement data of one magnet's Surface Field at very low temperatures.  If you start at room temperature (20°C) and get colder, the strength of the magnet increases by a small amount.  Below about -125°C, the strength then drops much more quickly.

Still, even at temperatures near absolute zero, there is still a good deal of magnetic strength left.  Even at the boiling point of liquid nitrogen, -196°C, there's still roughly 87% of the field strength you would find at room temperature.

Neodymium magnets are certainly usable at these low temperatures, but the loss in strength below -150°C should be planned for.  In most cases, the strength should return to normal once the magnet is brought back up to room temperature.

Why does this happen?  Neodymium magnets have a preferred magnetization direction. At these very cold temperatures, something happens in the structure of the molecules in the magnets, which temporarily changes the preferred direction by as much as a 30 degree angle.  This change is what reduces the strength.  When heated back up, the orientation returns to the original direction.