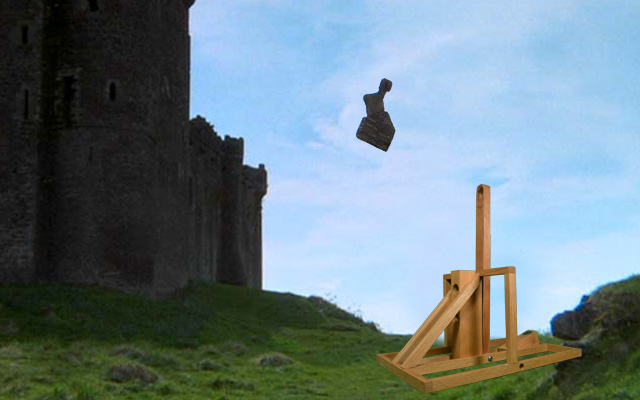 Run away, run away!

Magnets are everywhere - they are used in healthcare products, food production, motors, tech devices, space (like the Mars Rover!), woodworking, home projects, and much, much more. But did you know that they were used in medieval times to help create catapults and other ancient mechanisms?

No? That's because they weren't, but follow along as we build a magnetic catapult, as well as some other "mechanisms"!

Medieval catapults used either a counterweight to help fling a projectile forward or used a long tension rod, similar to how a crossbow works, to spring the throwing arm forward. Our design uses both repelling and attracting magnets.

In the graph on the right, we show the force vs distance. We'll assume a distance of "0" is when the arm is pulled back all the way. When the arm is released, the 55 lb repel force quickly diminishes with distance. At the center of the movement, there is virtually no repel force between the arm and the base, and no attracting force between the arm and the stop. However, the momentum carries the arm through this zone, and the arm and stop magnets start attracting. At first this attraction is low, but the force exponentially increases as the magnets get closer and closer. This all happens in about 0.03 seconds!

Placing a NSB8 1/2" steel ball as the projectile, we can launch it around 14 feet! If we angle the catapult better (around 22.5° to be exact), we can achieve a distance of over 25 feet!

Let's add some Gauss guns to our arsenal. Check out our previous Gauss Guns article to read about the basic principles behind these. This time, we made a much more powerful one. This new design consists of a track of magnets, starting smaller and gradually stepping up the size and strength. One side of the track has the north pole facing up, the other side has the south pole facing up on each magnet. There is also a small gap between each magnet. Then, a sphere magnet is placed into a non-ferrous track in the middle of the two magnet arrays.

The sphere magnet starts slow, but very quickly accelerates to the end with the larger magnets. If you place a non-ferrous ball or object at the end, the sphere magnet smashes into it and sends it flying! Check out the exciting video below to see what this thing can do.

We used the SX0, SX8 and SY0 sphere magnets. Need a quick hitter? Try the SX0. Want to knock down the fortified walls? Choose the SY0. Only have storage for one size? The SX8 was the favorite for both quickness and damage. What if you don't have enough XP to buy neodymium spheres? You can use steel balls as well, but they aren't as fast or as powerful as using a magnet.

The projectile can be any non-ferrous object. We mostly used an aluminum ball, but we also found a pool 8 ball and large stainless steel nut to be quite effective.

What's happening here? Why does the sphere magnet accelerate so quickly? On the top level, it's simply because the sphere is more strongly attracted to the next largest magnet. As it gains momentum, the momentum carries the sphere through the gaps in the track, where the field is lower, and is pulled strongly to the next magnet along the track.

It just keeps adding more and more momentum as it goes. In theory, if we had endless sizes of magnets (which we almost do), you could make the track extremely long, following the pattern of using larger and larger magnets in the track, and the speed of the sphere would continue to increase. No, it's not perpetual motion, but it is an amazing phenomenon.

This design is more like a Rail Gun, which we talk about in the Magnet Cannon article below. We were able to launch a projectile around 40 mph with this design!!

If all the same sized magnets were used, the sphere would still roll through array when started with a slight push, but it wouldn't accelerate like it does with the larger array. Also, since all the magnets are the same size and strength, the sphere would eventually find a "settling" point and come to a stop.

Another way to use magnets to siege a castle is a magnetic cannon! We actually devoted a whole article to this a few years back, read it here. Check out the video below to see it in action!

What mechanisms do you think could be made with magnets? Let us know! Our magnetic weaponry R&D department is looking to add to our arsenal...