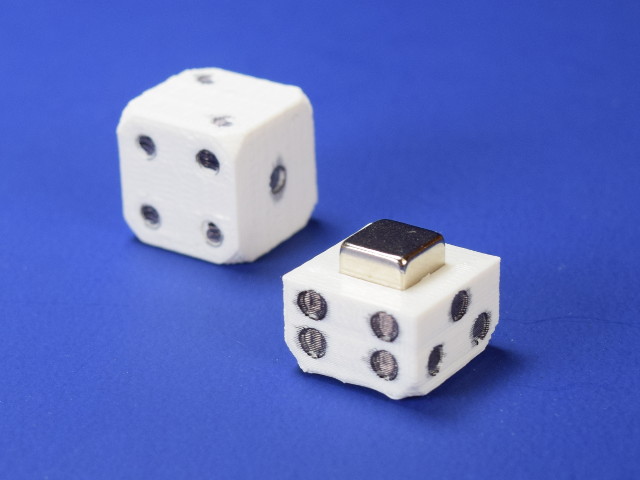 3D printed dice, each with a magnet hidden inside

Can magnetic dice really help someone cheat?  Is this really a thing?  How would that even work?

Though our handiwork isn't slick enough to fool a casino pit boss, a few experiments might help determine if magnetic dice are feasible.  Let's cheat with magnetic dice!

We created six individual dice, each with a different sized magnet inside.  We 3D printed the shapes, each with a cavity inside to hold a single cube magnet.  With careful timing during the printing process, we inserted the magnet as the die was printed around it.

In each case, we inserted the magnet with the north pole facing the one, and the south pole facing the six.  Each die had a subsequently larger magnet inside.  The weakest has just a tiny, 3/16” B333 cube inside, whereas the largest is almost filled with the 1/2” B888 cube.  Standard dice are sized as a 5/8” cube, so that last one is mostly magnet!

Can a die be a compass? 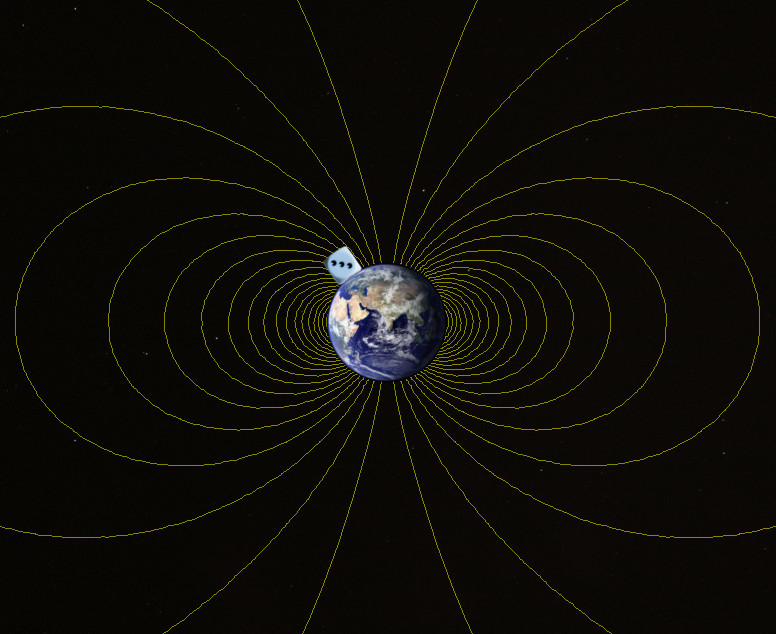 What if the dice weakly aligned with Earth's magnetic field?
[Not to scale]

Before getting into anything fancy like a dice table rigged with an electromagnet, a more basic question has been on our minds.  Would the magnet’s interaction with the earth’s magnetic field make one roll more likely than another?

The force from this magnetic interaction is weak.  It's not enough to overcome the random bouncing around of a die, mostly.  It's not going to force it to land on a six every time.  Sometimes though, if the die is teetering on an edge, might this little magnetic force tip the balance more one way?  In the long run, would we roll more sixes? 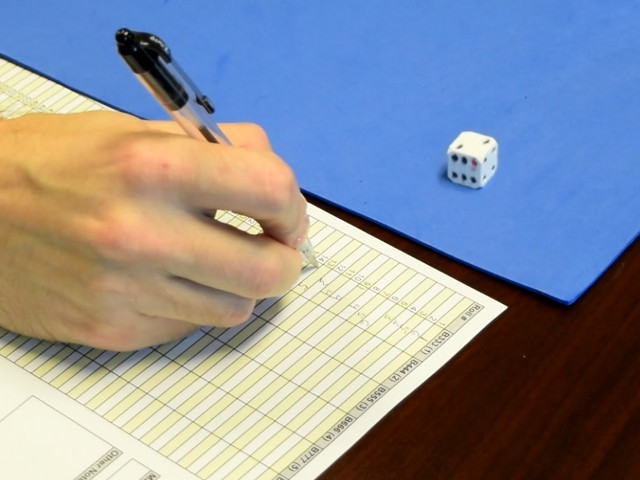 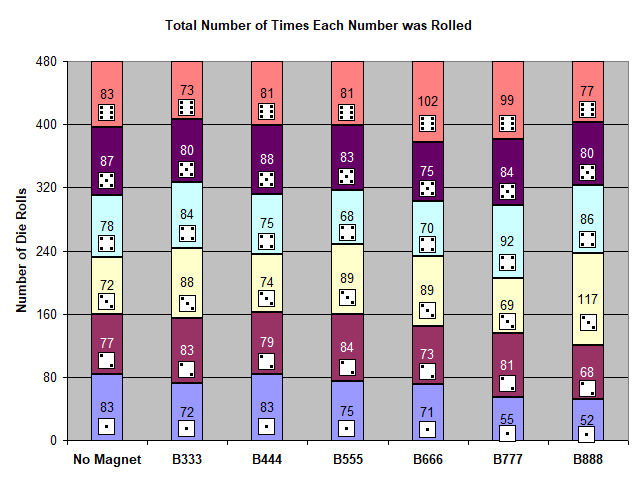 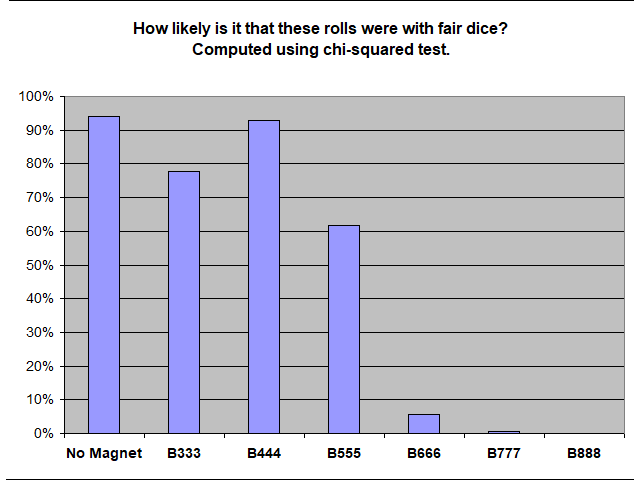 To test the theory, we rolled the dice.  A lot.  Each die was rolled by multiple people, totaling 480 recorded rolls for each die.  Any tendency to roll more towards one number should show up.  We guessed that we’d see this effect increase with increased magnet size/strength.

With 480 rolls of each die, we expect each individual number (1-6) to show up about 80 times.  We wouldn’t expect the result to be exactly 80 rolls of each number, but it should be something fairly close.

The graphs of results show:

Why was three more likely?  We're not sure, but it may have something to do with the 3D printing.  All of our dice were printed on the printer's table with the three facing down.  Would that affect it somehow?  We're not sure.

It was a lot of fun making and testing these dice.  There's one thing that doesn’t show up in the numbers: The weight isn’t right.  The 3D printed plastic is lighter than regulation dice.  The dice with big magnets are much heavier than regulation.  If you let someone handle the big-magnet dice, they’ll know something is wrong very quickly.

The lightest magnet that gave us predictable results was the B666.  This magnet weighs about 6.5g, which is quite a bit more than a regulation die of 4.1g.  When you add the printed plastic, it’s nearly twice as heavy as normal. 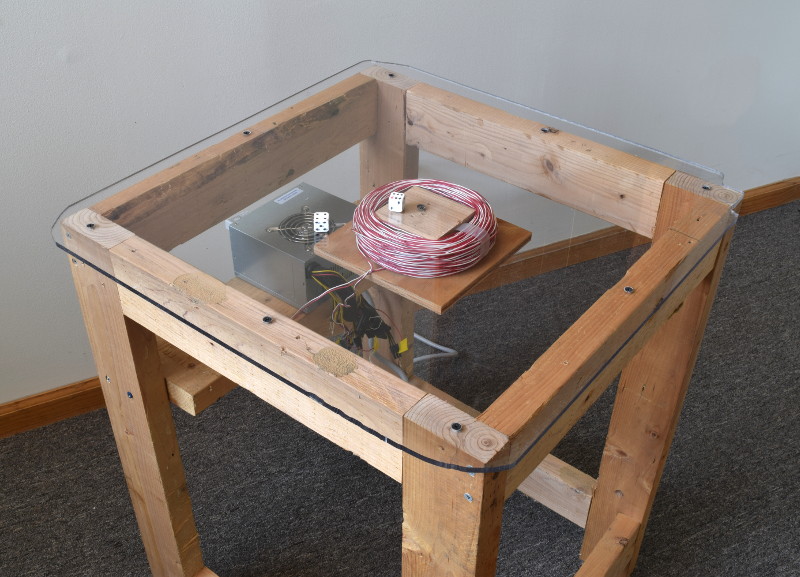 A crooked dice table (not for sale).

With some magnetic dice to play with, it’s time to test the elephant in the room.  What about a table with an electromagnet underneath?  Can the house play unfairly with such a device?

If the dice is at all magnetic, then this has to be feasible.  We noticed a difference in the rolls done in Earth’s relatively weak 0.5 gauss field.  There has to be more influence if we increase the field strength on top of the table.  What if the field were 30 times stronger?

We wanted to make the coil twice as large, but ran out of wire!

Field at the center of a loop (adapted from HyperPhysics)

Theoretically, we should see roughly 19 gauss at the center.  That’s not a perfect theoretical analysis, but gets us in the ballpark.  We measured about 15 gauss at the table surface, so close enough.

How effective is 15 gauss?  Too much!  In the center of the circle, the dice with the four largest magnets won’t stay down on any number adjacent to six.  Set it down on a 2, 3, 4 or 5, and the dice will jump to display a 6.  This is a little too obvious!

It will set down on a one, even if it’s unlikely to land on a one during a roll.

This is too strong to leave turned on all the time.  Dice that land more often on one number will be easy to spot very quickly.  A setup this strong would only be turned on occasionally to fool people, only getting the six for a key roll.

We didn't make it very large, but the coil could just as easily be much larger.  It could be made as large as the table! We skipped this step because that would take a lot more wire, which can be expensive.  For a proof-of-concept, we worked with materials at hand.

Please, do not cheat at dice.  Don’t blame us for getting kicked out of a casino!  We don’t promote making crooked dice.  As always, this exploration was really just an excuse to play with magnets.

If you notice your dice stick to steel, though, somebody might be cheating.