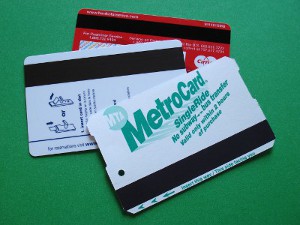 We receive a steady stream of questions about how powerful neodymium magnets might affect the magnetic strip on a credit card.  This includes questions such as:

While we have a good idea about how these things should work theoretically, it seemed about time to try erasing cards with some magnets.  This article describes our test results with some cards and a card reader, and provides some guidelines about how to avoid erasing a credit card accidentally.

What is a magnetic stripe card?

The first prototype of magnetic stripe card used a strip of cellophane magnetic tape fixed to a piece of cardboard with tape. [source]

The magnetic stripes on many credit, banking and other types of cards use a strip of magnetic material to store digital data.  A small amount of data is stored on the strip, including the cardholder's name, account number, expiration date, etc.

Magnetic stripes were originally invented in 1960 by IBM to make purchasing with credit cards faster and allow greater use of computers during the process.  The growing use of cards by banks, airlines and stores required a faster data entry method than rubbing carbon paper over embossed numbers!

By encoding data on the magnetic stripe, data can be entered into a computer with a single swipe.  To the computer, it’s the equivalent of typing the same information in, only faster.  In fact, the inexpensive card readers now available look just like another keyboard to your PC.  Plug it into a USB port and swipe a card, and the computer sees the output just as if you were typing the data in.

Can you see the data on a magnetic strip? 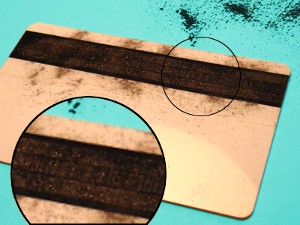 You can't visibly see the data on a magnetic stripe.  By pouring some iron filings or dust on a card, however, we can see vertical strips in the iron dust that indicate where the data is.  The strip is like a tiny series of magnets, which interacts with the dust.

In the picture, the vertical lines of the middle stripe (Track 2) are especially obvious, since they are more widely spaced than tracks 1 & 3.

Can a neodymium magnet erase or scramble the data on a magnetic strip?

Yes.  If you rub a neodymium magnet directly across the magnetic stripe, with the magnet touching the card, the data is likely to be erased or scrambled.

How strong must the magnetic field be to erase these magnetic strips? 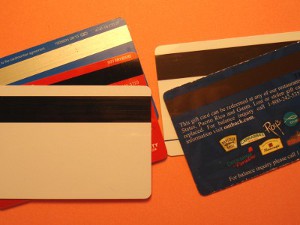 The magnetic strip on credit cards come in two varieties.  The high-coercivity ones, like a typical credit card, require a field strength of somewhere around 4,000 gauss to demagnetize.  The low-coercivity ones that are often re-written, like hotel keys or gift cards, require about 300 gauss.  From Wikipedia:

Magstripes come in two main varieties: high-coercivity (HiCo) at 4000 Oe and low-coercivity (LoCo) at 300 Oe but it is not infrequent to have intermediate values at 2750 Oe.  In practical terms, usually low coercivity magnetic stripes are a light brown color, and high coercivity stripes are nearly black...

The key to keeping cards safe is to keep a bit of distance between the magnet and the magnetic strip.  Looking for a conservative, general rule that works for almost all magnets?  Keep at least 1” between a magnet and a credit card, and 5-6” between a magnet and a low coercivity card like a hotel room key.  This is true for even our most huge and powerful magnets; smaller distances can be safe for smaller magnets.

How close can you bring a specific magnet to a magnetic stripe without erasing it?

It depends on the size of the magnet.  Let’s consider the case of a D88 cylinder magnet and a typical, high coercivity credit card.  Theoretically, the stripe has to “see” a magnetic field of about 4000 gauss to erase it.  Using our online magnet calculator (or the formulas found in our article on Surface Fields), we can estimate the field strength at various distances from this magnet.

Plugging numbers into the calculator, we find that the field strength is very high at the surface, about 5903 gauss.  The field strength drops below 4,000 gauss at about 0.083” away from the surface.  To test this, we move a magnet near the credit card at various distances.  In the video below, we controlled this magnet-to-card distance by stacking some paper of known thickness on top of the card.  Our test results agreed with the theory: At distances closer than about 1/16” away, we were able to render the card unreadable with this magnet.

Below, we share a short video of our testing at these distances with a high coercivity card. 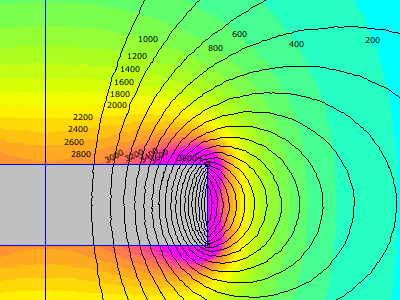 Depiction of the magnetic field near the edges of a D82 disc magnet.

What about a smaller magnet?  A D82 magnet has a listed surface field less than 3,000 gauss.  Will this magnet be OK at any distance?

What about a bigger magnet?  We tried using a powerful 1-1/4” diameter x 1” thick DX4X0 magnet.  Theoretically, the field strength drops to about 4,000 gauss at 0.18” away from the surface of the magnet.  In our testing, we found that we had to get a little closer than this to wipe the magnetic stripe.

Are these estimates accurate in all situations?

No, it depends very much on the details of your particular situation.  The tests we showed here are for a single magnet near a single card.

In each of these cases, stronger magnetic fields are more likely to damage a credit card.

Can the strength of a magnetic field be lowered with shielding?  Sure.  A steel surface between the magnet and the card can reduce the magnetic field at the stripe.  Learn more in our article about Shielding Materials.

How much shielding is enough?  It depends on the details of your setup.

Does the direction that a magnet faces the credit card matter, north vs. south?

No, the direction does not seem to matter much.  The strength of the magnetic field seems to be the important factor when erasing a credit card.  The strength will be about the same whether you have the north or the south pole of a magnet near the card.

I want to make a wallet or money clip.  How can I make sure the magnet won’t hurt credit cards?

The key to success is having some distance between the magnet and the card.  For example, some disc magnets inside a leather wallet or purse like the D81 or D82 might need at least 1/32” thick material between the magnet and any credit cards that might get close to the surface of the material.  If you are using our durable Sewing Magnets that are made specifically for this sort of closure, an absolute minimum of 1/32" of material is needed.  For some safety margin, we recommend using thicker material, more like 1/16" thick.

While we think this advice is pretty good, each situation can be a little different.  Be sure to test your design thoroughly before putting any cards next to a magnet!

For advice on magnetic closures, see our articles about Adhesive Backed Magnets and Sewing Magnets.

What about RFID chips?  Will strong magnets affect or disable these devices?

No.  RFID chips send out a radio signal, which is not affected by permanent magnets.  While RFID devices can be powered by a changing magnetic field (by electromagnetic induction), they can not be scrambled, erased or blocked with a strong permanent magnet.

Appendix: How is information stored on a magnetic stripe? (WARNING: Technical Content follows) 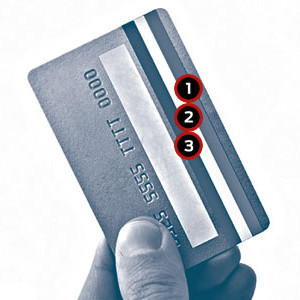 The three tracks on a typical magnetic stripe

If you are interested in the details of how bits of information are stored on a card, this appendix is for you.  If reading about binary numbers and checksums makes your eyes glaze over, stop here.  There really isn't any more information about how magnets affect magnetic stripes.

There are actually three tracks, or stripes of data along the magnetic strip of a credit card.  The most common standard includes:

When we swipe a credit card through a reader, we find that Track 1 includes:

That data is encoded as a series of ones and zeros along the magnetic strip.  Think of it like a bunch of little magnets, arranged in a row along the strip.  There’s some convention, like if the north pole is facing up it’s a one, and if the south pole is facing up it’s a zero.  By reading the flip-flopping series of magnetization directions, zeros and ones are stored on the magnetic strip.  This explanation is a bit simplified (and ignores some interesting details such as timing bits, that are used to sense how fast the card is moving through the reader), but that’s the basic idea.

This is just like information is stored in zeros and ones on the hard drive of your computer, just on the back of a card.

How is the data really stored?  If you’re into binary numbers and checksums, here’s an example of how data is encoded on a credit card.  Let’s walk through a short example with a short string of characters and convert it into ones and zeros.  Most folks really don’t need to know this stuff – modern card readers do all this automatically.

Why mention it here?  What we find most interesting is the use of multiple checksums within the data, which help identify if the data has been scrambled.  This means that if the stripe is somehow damaged or erased, you’ll tend to see it simply not work in a card reader, rather than providing bad data.

Here’s the brief example: Let’s write a single word “MAGNETS” without the quotes.  For track 1 of a credit card strip, we encode letters and numbers in a six-bit code with an added odd parity bit, as specified in ISO/IEC 7811-2.

For each letter, we assign a number according to the Decimal Sixbit table (shown in the Wikipedia link), an earlier character encoding scheme that preceded ASCII.  In this ISO format, we start our data string with a % symbol and end with a question mark.  For our string of characters "MAGNETS", we actually encode the string: "%MAGNETS?".  The binary encoding looks like:

Without any error checking, we could just string these binary numbers together and write them to the card.  However, this does not include any method of detecting read errors.  Per the ISO standard, we include a few checksums to verify the data is correct.  With these checks, if one or two of these bits (a 0 or 1 character) is off, we can usually see an error.

With this extra parity bit added, a chart of binary digits looks like this:

Before we’re done, we have to add one more row at the bottom called the LRC, or Longitudinal Redundancy Check.  In each vertical column of the table above, B5 through B0, we sum up the digits in the column.  The new “LRC” line contains an even parity bit.  That is, we add a digit that makes the sum even.  If the sum of the numbers above that digit was even, the bit is 0.  If the sum was odd, the bit is 1.  Here's an updated table with the LRC row added:

The parity bit in the LRC row is an odd parity bit for the horizontal row of LRC numbers B5 through B0.  Note that we reversed the order of the B0 through B5 digits in this last table.

With this table, we have all the data we need.  Just list the binary number characters in a row, one after another.  What is written to Track 1 of the card looks like this:

That’s the actual ones and zeros that get written to Track 1 of the magnetic stripe on the card.